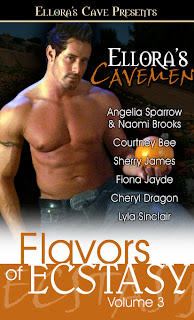 It's the height of ego to review your own book. Oh well.

I was excited beyond measure when I got word that "Brazen Cherry Tart" had been picked up for the Cavemen series. This is, after all, the flagship anthology, the one that can get your name out there.

When I saw the cover, I got more excited. It was hot. It wasn't weird. No one was molesting pumpkins or being anatomically improbably or having their heads pasted on, yay.

And, omg, ZOMG, Naomi and me, we was FIRST, Jack! /Bill Cosby impersonation.

So, all in all, I was very excited about Cavemen.

I read my story.
"Cherry Tart" had been slightly retitled and sexed up a little. But it remained a stagecoach romance, set on the shuttle to Io in 1897. Better than I remembered it being. I was pleased.


"Climbing the Corporate Ladder Without Panties" by Courtney Bee came next.
Given the title, I wasn't having high expectations. Stiff Corporate Drone Kate who is stuck in her position gets caught having a moment by the copier repair guy. He spanks her. They have hot sex. She loosens up and dresses sexy and gets the promotion and raise.

I did NOT like this story. It sends the message looks and attitude are more important than competence. That a short skirt will get a raise quicker than a performance review. And that women who wear their suits like armor really just need a good spanking. Some of the sex felt coercive as well. 1/5 stars

"Eight Seconds" by Sherry James was cute and sweet, but lacking plot. Rancher/Erotica author Taylorr is getting lonesome and considering buying some lingiere to seduce her brother's BFF next time he's in town, since she hasn't been laid in 2 years. BFF, Devlin, turns up at her ranch in a blizzard. Sex ensues.

Good voice. Good atmosphere. I imagined myself in the middle of a high-plains blizzard very easily. No conflict. 2/5 stars

"Pitch Black" by Fiona Jayde is a decent little thriller. Kate is a spy in Kiev. Nicholai orchestrates a blackout that lets her hide from the Russians. They take it on the run to stay alive.

This was pretty good. Not my genre, but entertaining enough to grab me and keep me reading. The sex flowed naturally from the action. The locations and characters were believble. 4/5 stars

I'd looked forward to "Shifting Sides" by Cheryl Dragon. It sounded right up my alley. A dragon shifter and a cat shifter who had been captives and experiemental subjects together re-encounter each other on an evacuated Earth. Breman, the dragon, has come for Kiren, the cat, to entice her to come back to a breakaway colony where shifters are full citizens.

This...could have been amazing if it had had less sex. The first two chapters are sex, sex and more sex. I finally gave up and skipped to chapter three where the real action started. Once there, Dragon did an awesome job on the world building. I would like to read more set in this milieu. 3/5 stars

"The Johnson Obsession" by Lyla Sinclair was a pleasant surprise. I wasn't expecting much from it, given the title. But Sinclair's clever, snarky voice pulled me right into this parody of a certain type of woman who reads kinky romance. Our uptight heroine, Vivian, has been drawing her hot neighbor Duke Johnson for a while. But some mixed up mail lands Duke on her doorstep to deliver it, including the spicy, kinky romance novel that he read....

The sex is incredibly hot and playful, the author's voice is funny and clever. The only real criticism I have is one turn of phrase: "She felt a liquid release between her legs." My first thought was "She wet herself?" The plot was thin, but the characters were engaging. 3/5 stars.


Production values:
The ebook is laid out nicely and easy to read. The print version is done on greyish pulp with a thin cover. The font is easy to read, though.

Overall, I give the collection 2 stars out 5. Some of the stories are very entertaining. The e-book version is the better value.
Posted by Angelia Sparrow at 8:58 AM