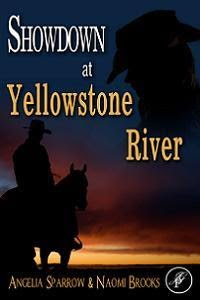 This is a heterosexual (for certain values of that orientation) Western.

Since I can't access the publisher's site (someone on past Dallas is too slow on the uptake and we keep timing out), have an excerpt rather than a blurb.

~* * *~
On a gray Saturday afternoon in mid-October, when his bad leg said snow was on the way, Matt had finished laying up his supplies and stopped in at the Purple Garter for a drink. He took a single glass of whiskey at the bar and sipped it, watching the men around him. Cowpokes in off the trail and ranch-hands eager to spend their pay crowded the tables. The Professor plunked away at the old piano, with more enthusiasm than skill, and Ardis did her best to keep the song on key. He was glad she was busy. She teased him now and then about his proposal. Never unkindly, true, but he disliked making a fool of himself.

Matt glanced through the front window and saw Luke Smith hesitating just outside, a look of distress on his young face. He caught Matt's eye and twisted his kerchief in his hands, the picture of indecision. Matt gulped the end of his drink and hurried out just as Luke laid a hand on the saloon doors to enter.

"Luke, you can't go in such a place," he said. "You're too young and your Ma would skin me alive."

"Mr. Court--" He saw the boy's face was paper-white. "Mr. Williams is trying to have you killed. He just put it out on the telegraph wire for Paz. I saw the topaz this morning at the bank. A rider brought it in from Utah territory." Luke pulled a penny-dreadful out of his pocket. Matt knew most of the boys in town collected and traded the serials. This one showed a gunslinger with a gem-studded hatband, his face so shadowed as to be invisible.

“They say he never misses a kill, Mr. Court.” Luke flipped to a passage he'd clearly read many times. “See? Here. Paz moved like a ghost through the streets hunting his prey. While Braynard had considered absquabulating, under the notion that discretion is the better part of valor, he had decided to stay. He regretted that decision when the gunslinger stepped into the mouth of the alley where he was hiding and said, 'Draw.' Braynard drew, but too slowly. The shooting irons fell from his cooling fingers and Paz walked away from him to collect another stone.”

Luke's voice carried into the saloon. The men nearest the door fell silent. The silence spread to the surrounding tables, creeping over the whole establishment until even the Professor took his fingers off the keys.

Matt felt his face go hard. Paz was an outlaw, a hired killer with a name that ironically meant "peace." The only peace Paz dealt in was eternal peace. The serial novels and hack writers had built him up into a folk-hero of sorts, but Matt knew the truth of it. Wealthy men called him in to do their dirty work and paid him well to vanish. Vanish he did, every time, and when the U.S. Marshals arrived, nobody knew anything about the newest grave in the town burying ground.

Matt had actually seen Paz once, at a distance in Denver, but the outlaw didn't mingle, and he wasn't the target, so they'd had no congress. He had, however, taken the two dollars to help bury the poor fellow Paz had been gunning for.

"Mr. Williams wired for him," Luke repeated, "and he's coming to kill you, Mr. Court. Go to Montana. Hide in your mustang herds, until this blows over.”

Matt shook his head and rubbed his jaw. "Winter's coming, kid. A man doesn't run. If it's time for me to be sent on, nothing can stop it happening. I'll take Paz's bullet or I'll fall off a horse and break my own fool neck." He looked at the boy, almost a man. He guided Luke into the saloon and sat them down at a table. A half-dollar on the table got them drinks. Luke just stared at the amber liquid.