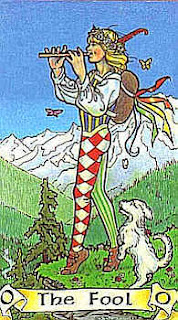 1 Corinthians 1, 27, "the weak things of the world hath God chosen that he may confound the strong."

Well, let folly be our cloak, a veil before the eyes of the Enemy! --Gandalf

A laugh can be a very powerful thing. Why, sometimes in life, it's the only weapon we have. --Roger Rabbit

Many faiths find the Fool a useful guise for a Teacher or Trickster.

Consider the musical GODSPELL. Jesus and his disciples are all portrayed as clowns. In the movie, he even wears big pompoms on his shoes.

(apologies for the Portugese subtitles)


But the teaching is given with laughter and received with joy, a thing missing in all too many churches and groups.

Here, it's set up to the point of even sounding like a vaudeville act:


We learn best when the lessons are entertaining. This is a well-known fact, to the point that the little people of the Sims 2 game learn best when they're enjoying themselves: painting, working on cars or watching cooking shows on TV. They don't want to sit and study out of a book, who does?

And the Holy Fool is a teacher, always.
SJ Tucker, Skinny White Chick, has Rabbit's Song about how Trickster was looking for teachers.


Who is the Fool?
He wears a different face for every faith but in every pantheon he serves three purposes:
Teacher/Redemptive Sacrifice
The Clown
The Bringer of Chaos

Whether Prometheus or Jesus or Raven, he loves humanity. He works to bring them knowledge and sometimes wisdom. Often, he provides people with a great treasure, the sun or fire. His good intentions may or may not work out. When the more powerful gods are angry, it is the Fool who intervenes on humanity's behalf, preventing complete destruction. And he pays the price, even to his own death or torment.

As the clown, Coyote and Bugs Bunny, Ananzi, the Pookas and Loki, The Fool plays jokes and tricks that always backfire, leaving him looking foolish but teaching something in the process.

But as Chaos, Loki, the Amadan, even the Joker and Randall Flagg are laughing at us as we scramble. This is the dark side of the trickster, the one who blows things up to enjoy the Boom, who is a psychopath. This is not the side of Loki that aided Thor in recovering his hammer, but rather the one that engineered Balder's death. This is the Ananzi who pretends to be dead and buried, but instead eats all the pea crop, leaving his family to starve. This one teaches us fear.


The Trickster and I have a dubious relationship. My husband is a devotee (under the Christian guise) and my baby girl insists Loki is her father because she was an oops, conceived when Loki overheard and laughed at me.

It has taken many years and much work on the part of the Trickster and his people in my life to even help me find my sense of humor. And every now and then I still have to shake my fist in the direction of Valhalla and say "Stop messing with my life!"

Following the Fool may take you right off the cliff, as in the Tarot card up there. But he'll be right beside you, handing you an umbrella and convincing you to fly.

Hi Angelia, nice blog, found it on a random Google search. I do love the Trickster in all forms; fact I'm a Lokean worshipper, ergo I have no fear of him. He's been more trustworthy to me than most. You should come and visit the Lokeans community liveJournal sometime. As to the "Psychopath - Kaboom!" thing - well, ya know that without the destruction, there wouldn't be any room for new creation, right? Muah ha. And, yet more specifically, without the odd political, well, assassination, or upset, such as Baldur's death, everything would moulder and grow more stagnant, pointlessly-ritualised - and unjust - as time went on. Asgard would become Gormenghast. (Fact, I think it already has, by the "time" of Lokasenna, and Loki was not in time to prevent this.) Sadly, surprisingly to date I haven't met more (openly) political Lokeans beside myself. But I would tend to say the people who get all squeamish about Baldur are also the people who would have been against the French Revolution!