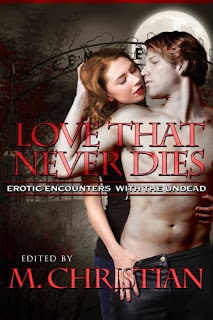 The Love that Never Dies is an anthology of darkly sexy stories involving the undead. This week, the sexy is all about line crossing...


My story is "Between Despair and Ecstasy."

Marcus is a highly trained Servant of the Undying. Samil has been dead, or rather Undying, since a Hittite sword ran him through as he marched in the armies of King David.


Not At ALL Work Safe.


Marcus pulled him closer and gave Samil the best kiss he'd ever given any man. Slow and deep, he took his time, shutting out the red reality of the house and losing himself in the wet silk of Samil's mouth and warmth of his body. After the first moments, Samil seized him, filling the kiss with desperate passion, his need almost  burning Marcus' lips.

When Samil released his mouth, Marcus stood. He smiled and continued kissing him, learning the planes of his face, the curves of his neck and even the taste of his blood-streaked chest. He lingered on the responsive nipples, ferreting them out from the dark curls around them and flicking with his tongue until they crinkled.
Samil moaned softly. He clutched at Marcus' sides, finally grabbing his ass with no gentleness at all.

Marcus looked up and then nipped the left nipple. "Take it if you want it. I am here to take care of you, after all."

Samil hauled him out of the kitchen by his shirt front and slammed him against one splashed wall in the hallway to kiss him again. His big hands fumbled at Marcus' belt and pants, shoving them to the floor half-way along the hall.

The master bedroom was as gruesome as the rest of the house. Four more vampires lay here, all decapitated. Samil had stacked the heads in a pyramid on the dresser. Marcus stripped off the rest of his
clothes. Samil shoved him onto the soaked bed, bending him over at the waist.

Two barely damp fingers–Marcus hoped it was spit and not blood–pushed into his body, going deep on the first fast thrust. He gasped under the treatment, but did not miss Samil's little noise that was almost a whimper. A third stretched him. He relaxed under it, waiting.