This is my first full-length heterosexual novel, and the longest thing I've ever written. 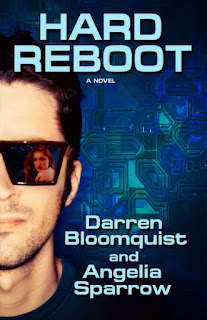 
Two years ago, Sean O'Neill's wife, Caitin—the net-runner called Irishgirl—was stolen from their bed. Now, he knows where she is, but getting her back is only the first step in a long journey.
Caitlin has been trained as a sex slave, her former skills as a net-runner and cyber-thief totally stripped from her, along with her identity and most independent thought. Powerful and wealthy social elites, playing their own dangerous high-stakes games, have hired Sean to retrieve her and again make her what she once was.
But two years is a long time to be out of the net and out of normal society. A lot of new programming has been laid down. Now, giving Irishgirl a hard reboot may take everything Sean has in him, and more...

Excerpt:
He came out of the bedroom to see Caitlin hadn't moved. She had to be getting uncomfortable in the position, but she held it. He stroked her hair as he passed. She arched into his hand for more.

"Tomorrow, we get you fitted for a jack. Tonight, cook. It's suppertime. Everything's pretty much the same as it was before." Sean settled himself on the couch to do a little networking. "We're out of everything but soyamix. We'll hit the grocery tomorrow. And I don't like the chicken a la king, it has a funny aftertaste."

She rose gracefully from her knees and walked into the kitchen, a sensual sway in her hips that had never been there before. Absorbed in watching her lovely back, he almost missed the fact that she gave wide berth to her old lounger and Net station. It struck him that those were the belongings of Caitlin McLean, the Irishgirl. They had no relevance to a slave, except as more work. They would be part of her cleaning duties and, at his command, she would have to use them to run as well.

She clearly dreaded that part of her new life here, with good reason. The Net was a minefield for even practiced runners, and Irishgirl had been off the grid for far, far too long. Not everything had changed, but enough had that the familiar would be more trap than help, like a faded signpost in an overgrown forest. There were drawbacks to being a living legend, namely outliving her legend. She'd be returning to the web as a rank amateur. Nonetheless, she would obey her master, even to her peril, so that her actions might please him. She could not do otherwise now. Her training would not allow it. He hated knowing that.

Sean checked his mail, confirmed the appointment with the slicer, and generally puttered as much as he could without actually jacking in. He didn't work much anymore. The time spent in the hospital, with visits and Net-access tightly controlled, had cost him most of his contacts. Caitlin was his job now, and he was as much at sea as she was, although he couldn't let anyone know that.

He listened to her in the kitchen, doubting she was quite ready to have him watch her. By now, she had discovered the new synth he'd bought with some of Gemini's money, with its midrange flavor suite that could produce anything from chicken chow mein to beef stew. Steak and lobster were for higher levels, but at least it had a suite. One of Caitlin's old places had simply had the synth, and they'd eaten plain soyamix, which was about as interesting as eating pizza-shaped wallboard, for three weeks.

Even as she cooked, she was nearly silent. It was unsettling, like having a ghost in the apartment. It struck him that she really was a ghost, a pale reflection of the Caitlin who used to share his life, living, laughing, and planning for the future together. His slave girl now haunted the places Caitlin had once occupied, but she was not Caitlin. She had no thought for anything but the present day and the task at hand, since the future was a matter for free people, real people who actually mattered.

If nothing else, her cooking had improved. His Caitlin was an indifferent cook at best, preferring to eat nutribars or whatever easily came to hand while she worked. He'd cooked for her, as often as not, and take-out had been common in their courtship and short marriage. He smiled, remembering their first date when he'd brought her Thai noodles and they'd fed the ducks in The Enclosure.

She'd laughed there amid the real plants, her voice bells and birds and falling rain, her short hair gleaming under the fake sun of the geodesic sky as she tossed her head back. He'd known then she was much more than an assignment. He wanted her. He'd wanted to make her laugh, to kiss her, to see her smile just for him and not merely at the silly antics of the ducks.

Now, as the apartment filled with good smells, he wondered if he'd ever see her laugh like that again. He set his jaw and closed his phone. That was his job. Gemini was paying him handsomely to get Caitlin back to herself, to teach her the Net, to make her laugh again, to love her. On top of that, Technomancer was watching as well, expecting much the same, but with her own personal agenda. Sean sat and pondered his divided loyalties.

He glanced at the wall niche where statues of St. Isidore of Seville, patron saint of the Net, and St. Dismas, the patron of thieves, stood. They couldn't help the situation. For a mad moment he wondered if anyone made statues of Judas Iscariot, the ultimate patron of divided loyalties, but put that out of his head and returned to studying St. Isidore's placid lines and the book the saint held. He wondered if he should add St. Jude or St. Dymphna to the niche. Either would work, because Caitlin was as lost a cause as he'd ever seen, and he had a lot of mental work to overcome. He'd look for one, and some candles. He suspected it would take a lot more than mere candles and saints to get his girl back.

Lost in thought, Sean barely noticed when she prostrated herself at his feet to let him know the food was ready.
Posted by Angelia Sparrow at 9:07 PM