We're kicking off October with Vampire Week here at the Den.

Your pic of the day: 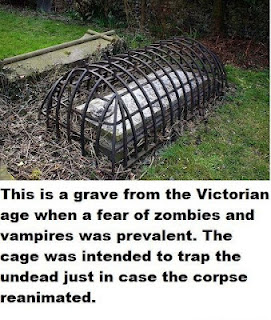 Your video of the day


Your excerpt of the day

This is from Power in the Blood. Oren's boys get a lesson on vampire history. Violence, rough language, ethnic slurs, Zionism, underage drinking, decapitated heads etc


"Now, the vamps here in Memphis. Are they all religious kooks?" The Kid
busied himself cleaning a gun as he asked.

"Not all of them," Brett said. "Dr. King runs the main vampire organization
here in town. He keeps most of the crew nonviolent. This church is a new thing. And
there are always renegade gangs that want to wallow in blood until the streets run with
it. Dad deals with them, if King or the cops don't get them first." Brett shrugged. "Our
cops have an eastward facing holding cell with great big windows just for vampire
prisoners caught killing humans. It doesn't see a lot of use. Neither does the reinforced
windowless one for the non-killing crimes."

"Swell—pacifist vamps, my favorite." The Kid's grin was ugly. He glanced up
as Anne was holding the empty bottle upside down, giving it a puzzled look. She
scowled and set it on the nightstand. "Damn it, woman." The sound in his voice was
half grudging, half admiring.

Anne stared at the bottle, unable to fathom how she had reached the bottom
so quickly. She'd been drinking too much since Lielit had gone to Sleep. She looked at
Marcus and changed the subject away from her drinking. "Same story everywhere.
How big is this church compared to the pacifists?"

Dennis piped up. "The church numbers about four thousand. King's group is
only a few hundred—we aren't sure how many. There are more vampires that aren't on
either side... Maybe a couple hundred." When Marcus raised a skeptical eyebrow,
Dennis shrugged. "Brigitte told me. And let me just say, the seven of us and the two of
you with bodies? That ain't going to make it if we have to fight."

"Other Undying have been called in," Samil said, his sudden words startling
after all his silence. "And we may have other help."

Marcus looked at him aghast, his mouth working and only garbled stuff
coming from the speakers. He finally managed, "They wouldn't."

Anne nodded, her face grim. "They would. The children should know what
kind of help they're getting. Tell them about the Hall of Sleepers—you've been back
more recently than I have." She really wanted another drink before this part, but she
made herself wait. She only had one more bottle, and the store across the street
wouldn't open until mid-morning.

Marcus clenched his teeth hard enough to make a vein pop out on his temple
and cause more gobbledygook from the computer, and then began. "The Sleepers are
Undying who have grown too old and seen too much. Some are nearly sane, others
deeply mad. The Council members are as old as many of the Sleepers, but since they
haven't the sheer trauma of a field agent's life, they remain sane longer. Samil is the
oldest operative still in the field, and they are hesitant to order him into the Hall." The
pride in his voice was unmistakable.

"That's because you learned to read in Athens five hundred years after you
died, darling." Marcus smiled, and Anne knew he was teasing his lover.
Samil bared his teeth without opening his eyes. "I butchered my way through
men, women, and children when I lived. Do you think destroying monsters will
bother me? Me, who saw my own pregnant wife spitted as I had done to so many
enemy women?"

Everyone in the room shuddered, and Samil's eyes opened. "It was a different
time. Every foreign child, every pregnant woman of the enemy, was a threat to my
sons' birthright, to our right to hold the Promised Land and the City of David. We
were a tiny people and surrounded by hostile tribes."

"My people are strong now." Samil smiled at the thought. "They could destroy
their enemies without thinking, if they dared public opinion. We will have our city
and the Temple again, in time, and the Ishmaelites will be nothing more than a bad
memory."

Anne broke out her last bottle of whiskey. Zealot talk always made her want to
drink more to shut it out. She'd developed a taste for the strong stuff in the nineteenth
century and had to watch herself. She offered it to Dennis and Brett first, noticing that
this time, Brett let Dennis have another drink against the horrors of the evening.
Dennis looked puzzled for a moment and asked, "But Mr. Samil, wouldn't
your children wake back up? Did the not-born one wake up?"

The head fixed him with a dark glare. Anne got the bottle back and had
another swallow. This was going to be unpleasant no matter how he answered.

"Two did," Samil said. He closed his eyes, lines of pain and sorrow marking
his handsome face. Anne understood at once. The children Samil had sired had
indeed awakened. He had only learned of his wife's betrayal after her death.
Marcus took it up. "The elder boy and the not-born did not awaken. Baruch
and Devorah are in the Hall of Sleepers. They are small children and the Council will
never allow them to be awakened."

Samil did not open his eyes. "Do you know how long and hard a three year
old can cry because she is hungry? I endured the starvation with them, so they would
not be alone when they went to Sleep. I told them we were mourning their mother.
They Sleep forever, the name of their father entombed with them. I became Samil, the
Angel of Death, instead."

The Kid helped himself to a quarter of the bottle in a single pull and Anne
scowled at him. "How many of them things you go through in a day, Red?"

"One, on good days. There haven't been any good days since I came to
Memphis. Three on bad. This is my fifth bottle today. But I had help." She tipped it at
him in mock salute and drank half of what remained without a breath.

Posted by Angelia Sparrow at 10:38 AM