The Glorious 25th of May! With Give Away! 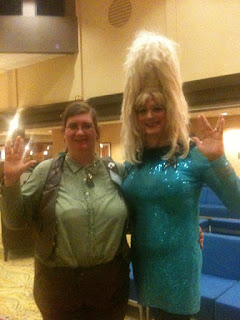 seen with me here at Outlanta Con 2012, is the International Towel Day Ambassador.


Those who read me know I am a complete geek. Sometimes I conceal my sources, sometimes I embrace them and sometimes they just show like a cheap slip.

So, tell me, loves. What's YOUR favorite bit of random geekery in one of my stories?

Tell me yours and on Monday, I'll tall you mine. Leave a comment, and I will enter you in a drawing for an especially geeky craft item. Could be a TARDIS washcloth. Could be a Hat of Cunning +1. Might be Amigurami. We'll see.

But for Towel Day, let me show you the most appropriate one:

Lincoln leaned in, his smile terrifying. "Tell me everything, pretty one, and we won't send you back used."

Kane took a deep breath, trying to decide what to say. He could tell Lincoln everything, and the leader might hand him over to the pack. He could lie his butt off, or he could say nothing. "In the beginning, the world was created. This made a lot of people very angry and was widely regarded as a bad move." Or he could be a smart-ass and quote Douglas Adams. Damn his memory bank for paying out that half-forgotten bit, and damn his mouth for running away with it. If his hands had been free, he would have face-palmed.

Lincoln scowled, but three of the other men snorted laughter. Kane put on his most innocent expression and batted his big blue eyes, feeling like an idiot. "Well, you did say everything, my lord Lincoln."


Some of my characters, like Kane, are sometime-geeks. He has a couple of moments, this, his naming scene and the first time he's hauled out for examination by the Wildpack .

The men hauled the captives out of the trailer. Dylan supported Missy, helping her walk on unsteady legs. They blinked against the light after days in the dark of the semi-trailer. He held her up when the men lined them up. Missy hung onto him, her taut skin of her pregnant belly shiny in the hot sun.

A tall, thin man in black leather pants and boots, wearing a mask of black and gold spirals and a spiked codpiece, strode along the line. Dylan looked around and bit down on a laugh. He had fallen into an old disaster movie, what with the ragtag array of vehicles and men, and the masked leader. He silenced his memory, which was yelling the quote from Road Warrior about "The Lord Humungous, the ruler of the wasteland, the ayatollah of rock-and-rollah!" and kept his face straight and his eyes down.


On the other hand, Sean and Gabe from Shell-Shocked are raging geeks. They live in a mass-media world, their personalities shaped by the movies and TV of their youth.

"I follow Joss Whedon's philosophy of sex, as set down in the sacred text of Buffy the Vampire Slayer."  Sean's face changed from glum to mock-serious.

Gabe giggled. "Sex is bad, all vampires are gay and sexbots are hot?"

Sean finally smiled at this. "Maybe not the last part."

Later, Sean alters a backpack so he can carry Gabe around, making Gabe more mobile than the wheelchair.

Sean stood up, the pack and Gabe on his back. He didn't stagger under the weight, but it was close. Gabe was heavy. "You still okay?"

"Yeah. This is nice." Gabe wrapped his arms around Sean's shoulders and kissed his neck.

"I like that," Sean smiled back at him. "Kinda heavy, but I'll be okay." He circled the room. "You're not gonna get seasick and barf down my back are you?"

Gabe just laughed and squeezed him a little. "No. Not the seasick type. And now we even have four hands to carry our stuff."

"Yeah, but only my lone pair of borg legs to carry it up."

Gabe kissed his neck and shoulders. "We can stop as often as you need." He kissed Sean again. "I really like this."

"All right." Sean shot an impish look back. "If you're set, Master Yoda, let's go shop."

"Forward, Sean Skywalker!" Gabe laughed all the way to the lobby.


Some of my books are nothing but fannish love letters. Heart of a Forest contains references to every Robin Hood movie (even Men in Tights), and many to Pyle's adaptation of the legend. But, if you know my head and my mental casting, you also see where it makes nods to Love! Valour! Compassion!, "Firefly", The Lion in Winter and Camelot.

The influences are fairly obvious in Curse of the Pharaoh's Manucurists. The Indiana Jones movies and Edgar Rice Burroughs are the most visible. But there are other tings, small and subtle for those who want to see them.

Remember, leave a comment with your favorite bit of geekery, and I will enter your name in a drawing for something awesomely geeky. It might even be a Hat of Cunning +1


Posted by Angelia Sparrow at 2:16 PM