My Sexy Saturday: Sexy Into You

From "Fruits of Thine" 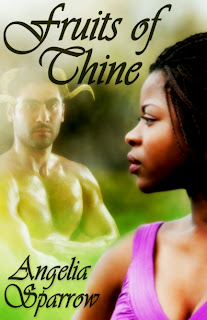 Blurb: Corporate retreats are dull at best, but when Carla is sent on one as a punitive measure, she isn't expecting anything to come of it, except a pink slip.

High in the Ozark mountains, nothing is quite as it seems and reality skews in interesting ways. The conference is too elementary and Carla notices people starting to go missing.

And the wild, incessant piping from the forest keeps her awake nights and stirs deeply buried desires...

She sat on the grass in a golden toga. She knew toga wasn’t quite the word, since only men had worn those, and they were complicated, while her dress was simple. But it was close enough. Her braids were caught back into a bun that looked like an old sculpture.

And the music kept playing as she sat and waited, getting hotter and hotter. Her nipples had poked up, disarranging the golden folds of her dress. She squirmed to relieve the growing tension and wetness between her legs.

And he had stepped into the clearing, tall and handsome, with lots of dark curly hair from his head and beard, down onto his chest and lower, until it turned into shaggy black goat legs with delicate cloven hooves.

Her first thought had been the Devil, but there had been no fear in his presence, only the ever-growing desire. He lifted a pipe of reeds to his lips and smiled at her as he blew across them to make the music. Pan, she had realized then. Pan, the old god of the forest and revelry, who had been the model for the devil as the Church in Rome started frowning on wild places, and things and people.

He joined her on the grass, lying on his belly, his legs out behind him. He looked up at her with longing and need in his eyes as he piped.

Carla reached out and stroked his curly hair. It twined through her fingers. He turned and kissed her wrist. A delicious tingle started at his lips and shot all through her, making her nipples ache and her clit twitch. She wanted more of his kisses. On her wrist, on her lips, on her breasts and between her legs. She wanted that sensual sizzle to envelop her, make her explode over and over again into fabulous orgasms.

“Hello, darling,” he whispered.
Posted by Angelia Sparrow at 2:00 AM

Glad to have read this, a bit of mythology then? Nicely written details and nice pacing.

Very interesting snippet. Love mythology and Pan. Thanks for sharing.

Donbald, it's actually urban fantasy. Carla is a receptionist with a major Memphis firm, lives a thoroughly modern life and is a bit flustered to find her nice African Methodist Episcopal world invaded by a Greek god.