The anthology Carved in Flesh hasn't done too badly.  And today, our story, "Tiocfaidh Ar La" gets a stand-alone release. (As always the cover is the buy link) 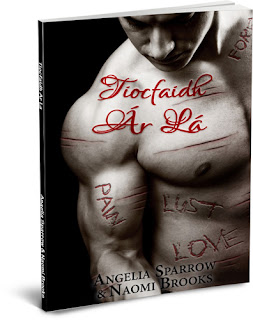 After enduring a brutal assault, IRA explosive expert Seosamh O'Brien, fled his war-torn homeland for America. Now Joe Colson, he wears his scarred face like armor and keeps out the whole world, protecting the meager little life he's carved out for himself as an illegal immigrant in the Boston slums. But a night programmer with a face like an an angel and an elfin grin full of mischief gets past the armor and scars, and into the softer places of Joe's heart, before he quite realizes what is happening.


Ryan cleaned up the plates, rinsing them in the sink before putting them back in the bag. "Yeah, I gotta go. Bad section of code tonight. I swear, sometimes I think they let chimpanzees code it and then hire me to make it work."

As Ryan passed Joe's chair, Joe reached up and caught him by the arm. "Ain't a date without a good-night kiss." He tugged a little, and Ryan bent right down. He kissed the kid and found out that Ryan did know how to kiss. When his tongue touched the boy's lips, Ryan opened up and let him right in. Joe tasted him, all warm pudding and soft mouth. Somehow, as they kissed, Ryan ended up straddling his lap, kissing back, his tongue in Joe's mouth, his arms around Joe's neck.

They parted and stared at each other for a second, and then Ryan plunged right back in for another kiss. Better than the first, that one left Joe hard and ready. Ryan ground against his erection, and Joe gasped into the kiss.

"Oh no!" Ryan moaned. "I'm gonna have to loop the surveillance now." He gave Joe a small peck and tucked his card into the breast-pocket of the uniform shirt. "Call me when you get off."

Joe chuckled at that, and Ryan realized what he'd said. He turned bright red and face-palmed.

"I'll call," Joe said. He watched as Ryan fled for the safety of his office and the chimpanzee code. Once the boy was gone, he laughed for the first time in years. Ryan was cute and sexy and wanted him. He put the bag of dishes away, set his hat on his head, and went off on his rounds to finish the shift.

What happens when this: 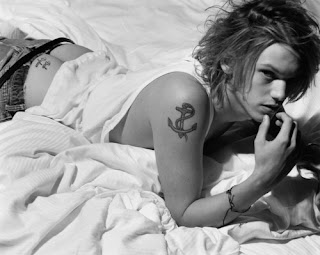 When the latter has a taste for older men and the tat that says "Bob Dylan" is a pair of lips...

And you can listen to my playlist, what I listened to while writing it, here:

Posted by Angelia Sparrow at 11:27 AM