So this week scare us in the best ways. Show us your sexy characters and their sexy romance on or near Halloween. Tell us the whole story on how they fell in love, what they do to stay in love and all the little details in between. Show us the good, the bad and the ugly as it’s those situations which pull us closer to those characters.


From "Blood Roses" in Hungry Hearts: 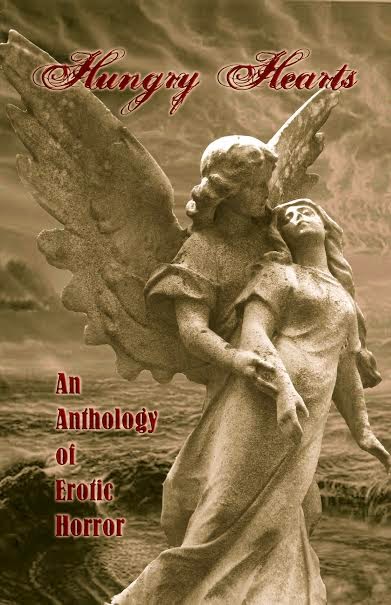 Dreams haunted her in the feverish sleep. She buried under quilts and blankets, and endured horrible nightmares of Michael, his travels ending in his death.

The worst one hung on her after she woke. In it, she had gone to look at the roses. They stood, black and dead, all the leaves fallen, above foul-smelling dirt. Michael had walked toward her out of the sunset, his eyes gleaming red as a demon's, his clothing filthy and his fair hair in thick matted clumps. With each step, he grew more gaunt and skeletal, his flesh hanging in rags just as his clothing did. She knew the roses did not lie. This Michael was dead.

Yet she did not step away from him. She had to know how he had died and where he might lie. If she could not have her fiancé, she would know where to visit him.

“Lilah,” he croaked, his voice thick with the sound of grave dirt falling on a coffin, filling the occupant's throat and mouth. His jaw moved, trying to remember how to speak. “My Lilah. You waited.”

The apparition reached out decaying hands, and indeed she could see the bones through the rotting flesh in places. “True love never dies, Lilah. Neither do the roses. They just need to be watered.”

He sank the sharp tips of the fingerbones into her wrists, spraying her blood over the roses. The unwholesome earth drank it greedily and the withered stems pulsed with unholy life, bringing forth putrid black leaves and heavy rose buds. The pain was negligible, and she stared into his eyes, still the same dark eyes, overlain with the red of death.

Dead Michael held her in a close embrace and his smell filled her nose, salty and scratchy, making her itch with the need to wash herself. Once her cat had left a gutted mouse under the settee that no one had found for a week. The same odor had permeated the parlor for days and Mother had resorted to burning juniper and sulfur to clear the air.


Posted by Angelia Sparrow at 3:00 AM

The visuals in your writing are breathtaking. Just wow!

Thank you. This is some of the most intense stuff I've written. I love doing horror.