My Sexy Saturday: Their Sexy Thoughts 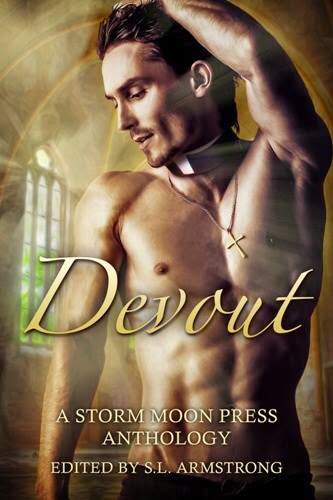 “How wonderful and multitudinous the works of the Lord,” the Bishop of Rochester whispered to himself as he watched the slow progress of the young lord on horseback. Leo Surrey couldn’t stop himself from tracing every aspect of Rhys, the son of the Earl of Kent. An odd name for the son of an English lord, but it was well-known in the region that Rhys' mother was a Welsh noble who had given him a name that appeared frequently in her family. The lovely young man was riding out early this day, tending his duties to the land and his father.

Sun shone on his uncovered hair, highlighting the black waves with a blue that nearly matched his eyes. When he stopped and dismounted, muscles rippled through his tight cote and hose. The Lady Eva was commonly held to be in a constant uproar about her inability to force her son to dress in accordance with his station. Instead, he preferred ordinary working clothes, leaving the finer stuff for church and holidays.

Leo watched the young heir to the earldom dig his hands into the earth and crumble a clod of it between his fingers. A scowl crossed his well-made features as he dusted his hands. He took the reins, walked the horse a few dozen yards, and repeated the motion.

The crops in the region had been poor for the last two years. Another bad harvest would cause a famine.

Rhys' long fingers dug into the ground, and Leo imagined them pressing against flesh instead of dirt. He jumped when his long-forgotten philosophy book slid from his lap to the floor. A smile quirked one corner of his mouth. God certainly had ways of reminding him.

He'd suffered from the ordinary temptations, and the hot blood of youth had cooled in its time. He was no decadent, as was the Spanish Pope, to sire sons into his fifties in defiance of his vows. Only once, when he was barely twenty, had he strayed with issue resulting. The child had been given over to the church and the woman well paid.

A light tap at the door told him the reminder of his sin was seeking counsel. “Come in, nephew. I hear you out there.”

Posted by Angelia Sparrow at 7:58 AM