So, from now until Valentine's, I'll be offering you kink fic, usually mine, that is better than 50 Shades, 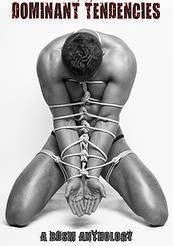 Combat mage Cody is new to the Delta Bluesmen and has extra energy to work off after his first assignment.


From "Riding the Edge:"


The kid seemed to breathe easier at that. “You're Antoine, right? I'm Cody.”

Antoine gave him a half smile. “I don't usually learn the new brothers' names until they've been with us for three months.”

Cody barked a little laugh at that. “Yeah, that's what Wilson said. You don't have a girl?”

Antoine just looked at him. “Boy, you know better.”

Cody nodded and ran one hand through his sweaty brown hair. “We the only ones?” he asked and Antoine heard something a little calmer in his voice. He had Cody's measure now. Little boy had been bossed around all his life, and now he needed someone else to tell him what to do.

“Eh, most of them will go for a bj if there's no other option, but they mostly like girls.” Antoine looked Cody over, making sure the kid saw him do it. He reached over and gripped Cody's shoulder. “Right now, boy, I have a powerful need and you're going to fix it for me.”

Cody tensed and Antoine could almost see the hot retort on the end of his tongue. Then he relaxed under Antoine's hand. “Anything you like, Mr. Vice-President, sir.” He picked up both his full beer and Antoine's half-finished one. “I'll clean up and you can tell me exactly what a president of vice does.”

Posted by Angelia Sparrow at 9:36 AM