Today is a double feature, technically a five-for-one.

Paying Forfeits begins as a couple who like their board and card games who start playing for forfeits. The games get taken into the bedroom, and then expanded to include a houseguest.
This is collected in Into Dark Waters 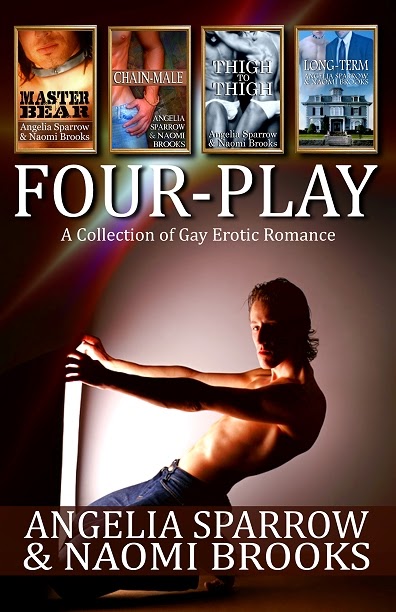 If you prefer to purchase the shorts separately
Master Bear, Chain Male, Thigh to Thigh, and Long Term

Master Bear is a tale of a dying top trying to make arrangements for a boy who doesn't want to live without him.
Chain-Male gives us a university librarian and a non-traditional student, with a very unconventional hobby.
Thigh to Thigh is the sequel to Paying Forfeits, in which Billy and Sam have earned a punishment.
Long-Term tells us about Teague, a university president and one-man sub rescue agency and Ian, his latest project, who becomes more.

One of my favorite bits from Chain-male:

Jace was sitting comfortably, working with a pair of pliers in each hand on some mail. “Nice walk?” he asked with a smile.

“Yeah. All kinds of stuff to buy and I found people singing.”

“Yeah, there’s always a bardic circle at night. Tomorrow, there will be belly dancers, too. And some idiot will drum all night long and another one will take it into his head to pipe the camp awake at dawn with a set of Great Pipes. Do you know,” Jace set the mail aside, “the bagpipe is the only musical instrument to be banned as a weapon of war?”

Chad laughed as he sat down. “What time is it?”

“Time to close up shop,” Jace said. He dowsed all the lanterns, except one, and covered his wares with a black cloth. He took the moneybox into the tent with him, after blowing out the last candle.

“You aren’t afraid of thieves?”

“I’m the only mail-maker out here. My stuff is pretty distinctive and I have an official inventory sheet. Money? Money has no maker’s mark. But my mail does.” Jace shut the tent flap
behind them.

Chad swallowed hard. It hit him that he was going to sleep with Jace tonight. Sleep at least, maybe more. Jace stripped down to his pants. Chad swallowed again at the sight of those sexy nipple rings, shining when Jace reached over his head and took the candle out of the ridgepole lantern. He sat on the bed, waiting, letting the candle make strange shadows.

Chad gulped for air and stuttered. Jace just laughed at him.

“Oh. Yeah.” Chad stripped off his tunic and shirt, the cool night making his nipples peak, and crawled in quickly. Jace blew out the candle’s last wick and covered them both with several layers of blankets, including one faux fur throw that looked like bearskin. “No lights?”

“Can’t sleep with them. Beside,” Jace kissed his neck, “we’re about to get busy, right?”

“We don’t want an audience.”

“Holy crap.” Chad gaped at the tale. “No lights,” he agreed
Posted by Angelia Sparrow at 6:35 PM