In these stories, many of them take place on other worlds, in a spaceship or right here on Earth with a sexy alien. Again, we leave the particulars up to you since you do it so, so well. Remember, our sexiness can happen anywhere, anytime, day or night. People fall in love in many different ways. It could be on a date, at a school dance, on a hike on Alpha Centauri, with the boy or girl from the next planet, just anywhere two or sometimes more people or beings are drawn together because of that feeling called love. 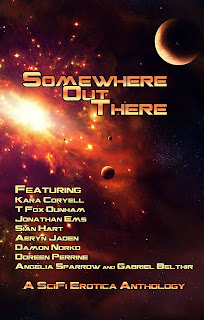 
"The Arcology Job" is a sequel to Heart's Bounty.

When Hevik's ex-wife, parents, brother and daughter are targeted for death, red-tagged, he and his fiance, Miho, have to stage a rescue, whether the family is ready or not.

Hevik swallowed hard and removed his earpiece. He remembered holding hands with Melina as they stepped into this door together the first time after their bonding. He remembered carrying Tarasha in, when she was the size of a data pad. Every evening for ten years, he had walked to this door, paused and opened it.

Now he raised a hand to knock. The sounds of a scuffle came to him through the metal of the door.

“Vilan, what are you doing?” The fear in Melina’s voice erased all doubt from his mind. He didn’t know who Vilan was or what he was doing, but it didn’t matter.

Hevik hit the door override on the top of the frame and stepped into the apartment, drawing his gun as he did.

“It’s a lot of money.” The slim man with his back to the door was trying to sound reasonable, but the kitchen knife in his hand gave lie to that.

Melina saw Hevik and gasped. Vilan turned and looked, and then raised the knife. “Three tags instead of two.”

Hevik shot him without hesitating. He looked at Melina. “Honey, I’m home.”

The other Sexy People


Posted by Angelia Sparrow at 6:00 AM