Hi and welcome to the SFR Brigade Summer Cafe. I am Angelia Sparrow, your server. 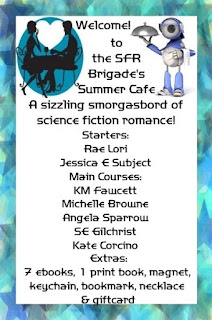 And now, for the Main Attraction

When I started writing the DisUnited States books, also called the Eight Thrones Cycle, I really had no idea what I was doing with the food. I knew real food was going to be less common among the working and middle class, in certain countries, something only those who grew it or those who could afford it would have. This is a world where the whole country broke down for over a year, distribution chains were disrupted and population centers starved.

One character who was a toddler during DisUnification, snaps at his teacher, “My first memory is hunger. Crying with it. And my mother holding me and reading to me because she had books but no food to give me.”

Nick, from Nikolai Revanant, lives on protein bars and fake coffee while he's a document clerk. I extrapolated some from current trends in food (this was before Soylent got started) and some attitudes (if you do not work, you should not eat) and came up with People Chow. 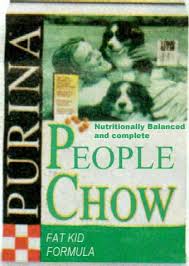 Glad Hands:
"He dug a package of WorkingMan Chow out of his locker. Purina, seeing the market for a human version of their pet foods, had developed several varieties some years back. WomanChow had more iron and calcium, KidChow had more fat. WorkingMan had more protein and enough calories to make two pouches adequate for a man who did physical labor. A lot of prisons had contracts with the company, since it saved them space, money and labor. Rumor had it Purina marketed a slave kibble in the C.S., which had all the nutrition and none of the taste. Chuck liked the chow for the
same reason everyone else did, because it was cheaper than real food and easy to transport. His favorite was the beef stew flavor. He ate real food when he had a refrigerator and a stove. But when he was on the road, the chow served him fine."

And everyone I talk to about this doesn't see it as amazing and revolutionary. They think it's awful. The idea of replacing food with crunchy nourishment nuggets appalls them. I'm a former trucker. I would LOVE cheap, nutritious, good-tasting food that doesn't require stopping, heating or utensils. It would be splendid for traveling and conventions, for rough nights when I'm on deadline and the family wants to eat, for days when my current job requires a lot of driving on a tight schedule.

But we have an emotional relationship with food. Just the smell of a certain dish can make years and miles melt away. And disconnecting people from each other, by making eating a solitary bodily function, like toileting, is one of the ways some of the more repressive countries operate. If you aren't emotionally connected to your family or friends, there's no reason not to sell them out, no reason to to turn them in for violating whatever law or moral code.

That was when I realized the countries also use food as a means of social control.
Pacifica and the US have very liberal social safety nets and treat food as a human right. They also have socialized medicine and see a balanced diet as cutting costs on that front. 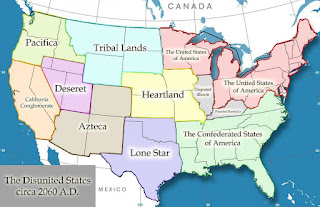 The CS and Lone Star, on the other hand, withhold food from segments of their population, trying to eradicate them without stooping to official genocide.

When the CS enters a food crisis, later in the series, charity in the form of Chow is given out by the government through the churches. Because people wouldn't take food from the government, and church attendance is legally mandatory.

On the other hand, Heartland makes a fetish of home-cooking. A good wife is one who can cook. Baking contests, chili competitions, home-churned ice-cream socials, canning contests and bake-offs are as socially mandatory as the church attendance and civic pride. A wife who can't cook is a disgrace. This too, is a means of social control. It reinforces gender roles and limits acceptable pursuits for women.

And just because it is my summer favorite, and totally illegal in the CS, where I live. Besides, what Sparrow could resist it? 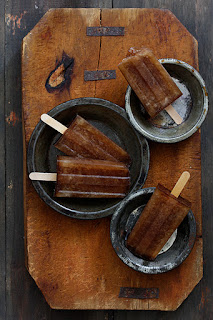 Place all ingredients in a large glass and stir to combine. Pour mixture into popsicles mold.

Freeze for about 2 hours or until mixture starts to solidify enough to hold a popsicle stick upright. Insert popsicle sticks and finish freezing popsicles overnight. To release popsicles run hot water on the outside of popsicle molds for 2-3 seconds.


And finally, I'm offering an electronic copy of Nikolai Revenant to all the readers who leave a comment about their favorite/most memorable food in a dystopian world. (You do have to leave a valid e-mail to get this) Or with their favorite summer recipe.
Posted by Angelia Sparrow at 7:00 AM

My basic food is nutrient bars of algae grown on Mars.

Ladies, I need an email if you would like a free copy of Nikolai. drop it to angeliasparrow at gmail and I'll send a book along

valorebooks.com received an "Unnatural Link Warning" from Google and we were hoping you would be kind enough to help us resolve this issue by removing the following backlinks from your website.


These backlink sources must be deleted immediately,
so that we can present Google with evidence that we have taken appropriate corrective action and the warning they gave us can be lifted.
A Google representative will then check to make sure that the active backlinks no longer cause alarm or set off their protocols.
Consequently, we would like you to remove any and all backlinks to valorebooks.com.

Thank you so much for your professional courtesy in handling this matter.

I would ask that you please accept my apology for engaging in manipulative SEO tactics which may cause you to receive a Terms of Service violation from Google.
I think that if you remove the following backlinks, the issue can be resolved without any damage to your site's visibility or search engine ranking.
The links are located at the following URLs:


I would advise that you delete these backlinks to perthpropertyvaluers.com.au as soon as you receive this message to avoid any penalties from Google.
I would be happy to follow up with you if you have any questions and I would greatly appreciate notification once you have deleted the backlinks.
I sincerely apologize for any harm I may have caused.

Thank you for your cooperation and understanding.