My Sexy Saturday: All About the Sexy

This week, a bit from "Blood Roses" in Hungry Hearts 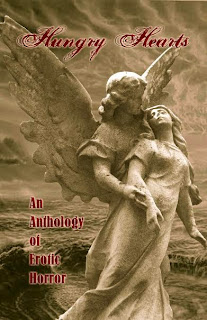 “My mother's roses. My father did the same when he proposed to her, years ago. I started the cuttings when I knew I wanted to marry you. I've planted five of them, for five is a magical number,” he told her. “Solomon's Seal of Truth had five points. It has the five senses. It has the four limbs and the heart, for what is conceived in the heart is done by the hands and feet. It is the five wounds of our Blessed Savior. It means I love you.” He pricked his index finger on the first bush and let five drops of blood fall on the disturbed earth at its base. “I will be true to you.” He pricked his middle finger and let five more fall at the base of the second bush. “I will be chaste for you.” His ring finger bled for the third. “I will remember you.” His smallest finger put its five drops at the base of the fourth. He held up his thumb. “I will return to you.” That bled on the earth of the fifth rosebush.

Lilah watched, her hands pressed to her mouth, feeling faint at the sight of her fiancé’s bloody fingers. She pulled out her kerchief, took his hand, covered in dirt from the planting and blood from the vows, and wiped it clean.

“When they bloom, I am on my way home to you and we shall be wed, dearest,” Michael said.

Lilah smiled. “That will be lovely. I'll carry them in my wedding bouquet.”

Michael held up his unhurt hand, one finger raised. “But, love, if they wither and die, despite the best of your care, the vows I have made are broken. I will be dead or unable to return to you.”

Lilah covered his lips with her own two fingers. “Hush. That's bad luck. Say a prayer quickly that it will pass you by.” She mumbled under her breath, begging God to not have heard Michael's words. Part of her considered the words silly superstition, a relic of the middle ages, in this day of railroads and telegraphs.

His voyage would be dangerous and there was every chance he might not return. She wanted him back. She wanted to hear his voice in the night, telling her all was well, to see his dark eyes look back from the face of her son, or brush out his fair curls on her daughter's head, before tying a ribbon around them


The Other Sexy People: