My Sexy Saturday: Something About Sexy

Sorry we're late today. Work got out of hand last night. Just as Rick's job is about to get out of hand... 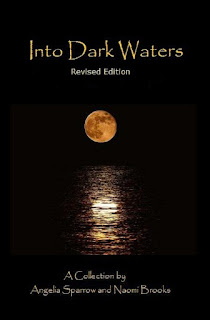 Blurb:
19 Tales of Love and Darkness
Into Dark Waters ebook from Inkstained Succcubus

Michael pulled away a little and ran a hand over him about an inch from his skin. “Your aura. You’re dead, but there are no hougan marks or loup-garous in it. What sort of revenant are you?”

Rick shrugged. “The Rick kind. I woke up on a morgue slab after I cracked up my bike back in 1981. I just sort of kept waking up after being shot or killed. Lost my last job when a scene in a kink club I was working went really bad. I wound up getting hanged. Boy, did the police freak out when I stopped them from zipping the body bag. I can’t stand those things.”

“You talk too much." Michael bit at his neck, hard enough to leave a bruise. “I’m not killing you tonight." He settled back onto the couch. “Suck me off.” Rick followed him and knelt between his feet, still naked. One large hand slid over his hair and down to trace his lips. "Your mouth was made for this." Michael's dark eyes burned and Rick felt his own cock jerk against his belly.

“Anything you want,” Rick said and swallowed his cock.

Afterward, Michael had him stay kneeling. He adjusted Rick’s posture and position with taps from his belt until he was satisfied. Rick stayed there a long time while Michael just looked. He was looking at the floor, as Michael had insisted. Then he heard a ruffle, like a pack of playing cards released into the air, and several bills fluttered to the floor around him.

“Undead whore with dead presidents." Michael walked to the door. “Pick them up, in your teeth. And crawl."


Rick went to hands and knees and picked up the first bill.


The Other Sexy People: