Unlike other giveaways, there are only 15 of these.
Leave a message here, and I will email you the download code. 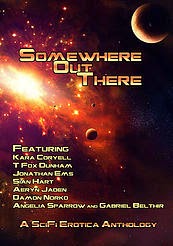 Blurb:
At its best, science fiction presents us not just with a vision of the future, but with more understanding of ourselves and how to get to that future. It presents us with ways to think about relationships and people. And this time, it’s about the shapes of relationships.

In these eight stories, we run the gamut. Whether a shipboard fantasy about a captain that turns into more or the new fiancé meeting the former spouse, people remain people, with loves and confusion.

Sometimes the love lies very close to jealousy and hatred, as in “Bodies!” Sometimes, it grows out of an unpleasant necessity, such as “Similar Species” and “Expectations.” Occasionally, it is the mother of creativity and invention, in “Tether”or just food for a species that feeds on emotions, from “A Very Emotional Scene.” And sometimes, it can leave people wondering if it was real or not, as it does in “Wide Awake.”

Love and sex are two very powerful drives and in these futures, they propel us far beyond our own world.

“I never loved anybody like I love you. Never knew I could.” K’Aran ducked his head and let the curtain of black shiny hair hide his flushed face, a feat a bit difficult for a seven-foot-tall giant. He never could hide his emotions from me.

He bared his pointy incisors at me in an attempt to look tough, making me laugh. “You’re an idiot, Than.”

“Takes one to know one.”

He stopped trying to impress me with his viciousness and cuddled me to his chest. It was a strange sensation, one I never wanted to get used to or take for granted. I was a tall man, well over six feet myself, but nowhere near his size. Not only was he freakishly huge by human standards, he had the muscles and the strength to go along with his size. My man was massive. In all ways. I smirked and bit on the nearest nipple to my lips, just because I knew how it made him squirm. We were too depleted of energy for anything else. Going at it for three rounds did that to any male, human, drakar or otherwise.

“You know I have to. Arkana is on the right track but it will be years, decades until you are ready for it. And I’ll come back. I promised, didn’t I?”

“I don’t like this, Than. Why does it have to be you? There are others who could...”

I shushed him and kissed his pouty, quivering lips. How he could look cute at his size and with his terrifying appearance, I did not know. But my kadush, my husband and my heart always managed to pull it off when he wanted something. I caressed the soft, leathery bluish-white skin of his cheek and saw my smile reflected back at me in his violet eyes. His black bat wings moved restlessly behind his shoulder blades as they always did when we were together. He had once explained that it was involuntary, similar to the way I shivered when he touched me.

“I’m the best qualified. The best adapted here. It’s just for a short while, and then I’ll be right back here by your side.”

“I know, Than. I just worry, kadush.” He smiled at me and winked roguishly, even now trying to set my mind at ease. “I’m expecting you to take my mind off such nonsense.”

“That’s what I thought I was doing during the last two hours,” I quipped.

“I’m really really worried. You should do it some more.”
Posted by Angelia Sparrow at 9:00 AM

I love queer sci fi.
Can I get an audiobook please?
Brian
slayer@junct.com

My email is Lulucudjoe@gmail.com if there are any left may I please have 1 :D