This weekend's free book is Adventuresses

It's SF in the loosest sense, encompassing steampunk, alternate history and space opera. 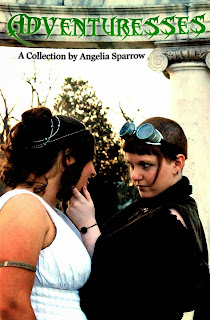 Blurb:
Ten tales of lesbian adventure take you from the far reaches of the galaxy to the science fiction convention down the road, from a steampunk west to a world where the Confederacy got nukes. Come along and fall in love with a waitress or a pirate or Medusa herself.

Excerpt:
The rice and carnitas gone, she pushed away the plate and picked up the tintype. She tried to rise, but a hand landed on her shoulder and held her in her seat.

“Leaving us already, stranger?” the man asked. “Don't you know it ain't polite to leave without offering to buy a drink for the whole place, at least when you're new in town?”

She tipped her head and gave him a look that made most men back right off. He was either dumber than most or less cautious. He never moved his hand. “Come on, grandma, buy us one.”

“Sí, cervaza,” one of the other farmers said.

“Don't make him get ugly, old lady,” added one of the night-doves hanging on her meal-ticket of the evening.

“He already ugly. Muy feo!” tossed out someone on the other side of the room. The men laughed. She had heard that tenor in crowds before. It never boded well. The intruder clamped his hand down harder, trying to hurt her. That would not do.  She returned her attention to her teacup, pretending to ignore the others.

She drew. Not the forward-facing guns on her thighs, but the ones tucked in the back of her belt. Her upper set of arms unfolded itself, flipped her coat back to the elbows and drew on her harasser.

A gasp went up. There were a few oddities around, but most kept their deformities out of sight if they could. Most of the first generation were long dead, with only a few living to adulthood and fewer still having children. The rebels had brought something out of Texas during the War, and her ma had been less than fifty miles from the place where they exploded it. It got into the air, the water and the ground, and spread from the original site.

“Care to let me get my rest now? I flew a long way today.”

“I'm sorry,” the man said, letting go of her shoulder and backing away.

She stood up, her lower arms in position to pull the guns on her thighs. The crowd looked and realized those were in quick-draw holsters, like a gunfighter's.

Posted by Angelia Sparrow at 9:00 AM