For the week of Lucky Thirteen,  a bit of space opera. 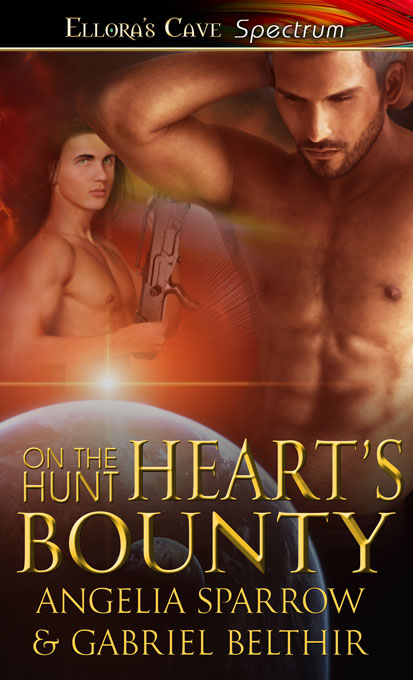 Blurb:
Hunting is a young man’s game and Miho is well suited to it. He is a product of centuries of selective breeding, making him human-plus. He has a reputation for finding his quarry. But he doesn’t expect to find an older man at the Tag Board looking for work of his own.

Hevik was outlawed and banished from his homeworld, and now lives a solitary life hunting small-time criminals among the planets. A pretty boy with hair as dark as deep space makes him reconsider that lifestyle.

As the fates keep throwing them together while they pursue the same bounty, both of them discover depths about themselves, and about their lust and need for each other, that makes chasing their quarry all the more dangerous.

A beep sounded on Miho’s comp and he pulled it up to load the details. He looked up at Hevik off and on, distracted. “That we do. Look, I gotta go pick up a new propulsion array and then figure out where I’m going. So toddle back to the Old Hunters’ Home, would you?” He stood and pulled himself waist-deep into the landing well to find a part number.

A sharp swat on his rear sent his legs scrabbling for purchase on empty air. He clung to the piston and bit down the cry that would have been his natural response. No sense giving this dirty old man the pleasure of hearing him yelp. He peeked out of the well and glared at Hevik. “You know, whatever makes you sleep better at night, pervert.”

Hevik’s grin got wider. “Couldn’t resist that perfect ass. A man’s gotta take what Lady Fortuna puts in his way because she never offers it twice.”

“You’re damn right she won’t.” Miho flipped his body over the piston and dangled his head down, removing his ass from future punishment. “Don’t you have better things to go do? Clean your dentures or something?” he asked derisively. He flat-out refused to admit that there was a part of him wondering why he didn’t ask for another swat. That would be an impulse to study later.

“Only if you fingerpainted on them, brat.”

A cheeky smile crossed Miho’s face as he pulled himself up inside the workings of his two-man ship completely, a tight squeeze for any mechanic. He didn’t respond. He didn’t dare. What was wrong with him? Hevik sent bolts of electricity through places that should never, ever respond to someone like him. He shook his head and tried to concentrate on the part numbers.

“Good hunting, kiddo.” The pat on his boot, almost a caress, startled Miho as much as the swat. He drew his foot up into the workspace and listened until he was sure Hevik was gone.


Posted by Angelia Sparrow at 1:00 AM

Nice snippet, Angelia! I really like the young-old thing.

Thanks for being part of My Sexy Saturday.