One of the perks of being an author is that you get to meet the niftiest people. Today, one of them is guest blogging. So, let's have a nicely Debauched welcome for Nick Valentino! 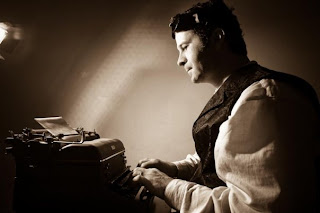 Thank you so much for Ms. Sparrow hosting me today! Originally, I met her at MidSouthCon a few years back and not only am I a fan of her writing but I consider her a really cool friend. So, thank you Angelia for having me today!

My reason for being her today is my second steampunk novel, Thomas Riley and The Maelstrom was just released on ZOVA Books and I'm doing a blog tour in support of it. 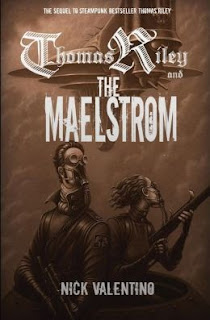 While this book is has the same action and adventure of the first book , it also has much more depth. I wanted to explore the characters and give the reader a little more "meat on the bone" when it came to personalities and actions. The first book, simply called, Thomas Riley, was a sort of an introduction to the characters and their steampunk world while I feel like Thomas Riley and The Maelstrom immerses the reader more into the war between Thomas Riley's country of West Canvia and Lemuria. There's also the second element of a love story which provides twists that even I didn't expect when first sitting down to plot the book. So, I have to say, I'm quite excited to share this with fans and new readers alike.

Thomas Riley and Cynthia Basset are off on a new adventure. This time, the tale is a darker one that explores a steampunk world in more depth and detail. If you read Thomas Riley, I feel like you will really enjoy Thomas Riley and The Maelstrom and if you haven't read the first book in the series, fear not, you can read each book without reading the one before it. 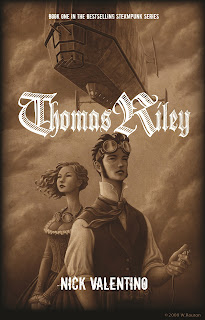 Want to know more? Here's the teaser blurb from the back of the book:

Thomas Riley and Cynthia Basset's adventures in their steampunk world have turned down a dark path. After an assassination attempt, the West Canvian heroes receive a message from a mysterious woman about the whereabouts of Cynthia's missing suitor and famous sky pirate, Sam Burges.

Cynthia insists on pursuing the lead despite great risk, so the two of them take off with a rogue colonial sky pirate and his eclectic crew to find the man that she loves. On their journey, Thomas and Cynthia learn that Sam has joined with their enemies, the Lemurians, under the supervision of the mad man, Doctor Wolfgang Gerhard.

To make matters worse, Sam is in a commanding position on board the secret airship, The Maelstrom, that has the ability to control the weather in a most nefarious way.

Thomas and Cynthia's loyalty to their country and to each other are laid on the line in this steampunk tale of love, loss and adventure.

Want a copy for yourself?