When you set out to write space opera, you have to know the territory!
Oh wait.
Tropes. I mean tropes.

And when you're writing erotica, you have a whole different set of tropes. Throw in kink and you now have a third set and you're busier than a one-legged nerf herder.

So what did we do when we were writing Heart's Bounty? 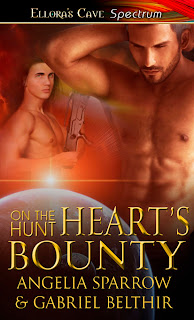 How do you make space sex kinky and sexy all at once?

With our characters, we decided to set them up as competition first. And as pretty much opposites. An older guy who's not much into men, but is hot for this particular pretty boy. He's a natural top, a commanding sort of figure when he wants to be, but he has to discover this outside of work or his former office. A younger man who likes his men, but hasn't ever fallen for someone this old. And he's deeply conflicted about his submission, since his people are frequent targets of slavers.

But once the sparks flew, and they had a moment or two together, we needed to keep our audience going with the SF part of the romance as well. It can't all be sex in nice beds while planetside, after winning a multi-species gladiatorial contest. Or even hot kink under the influence of a blind-fold drug.

We had to think about the basics of kink, what do we do, and how technology might change these in space. Ropes are ropes, right? What about ropes that keep their shape with a twist, just as memory-wire does these days? Or what about using a small zero-gee field for suspension play instead of any sort of bonds?

Sensation play is a delightful thing. A little cold, a little hot, a little rough, a little sharp, a little soft and gentle, all over your skin, making it wake up and tingle. But we decided to do this by neural induction and not have to fuss with picking up and putting down the melting ice and candles and sand paper and metal and fur and velvet. Nice, neat, one toy, no mess afterward, and all the fun. (I think I want one!)

And a cargo ship has all kinds of fun things lying around just waiting to be used.
Have a taste from the first time in the ship:

Then he stepped back, pulling Miho along, and bent his boy over at the waist, never letting go of the ponytail.

“Come on, we’re going to have some real fun now, boy. I won’t harm you. You have your words still.”

He led Miho into the cargo bay and spotted the cargo netting. “On your knees, right here. Eyes on the deck. I have some preparations to make. Beautiful boy.” Hevik stroked his hair and went to set up the netting. The hooks were in perfect position so he strung the net just like he’d seen pictures of. This was either going to be amazing or he was going to have the worst scene in the history of kink. Satisfied, he went back to Miho. “All right, boy, stand up and strip off.”

Miho stood and stripped naked, dropping his clothes on the nearby bench he always used to tinker on. He looked up at Hevik, seducing him with his eyes as he linked his hands behind his back and walked over to him.

Hevik lifted his chin and kissed his forehead. “Perfect. Now, I’m going to suspend you in the netting. This shouldn’t be too uncomfortable.” He gestured to where he had three layers attached. “Put your feet on there. One strap under your heel, one under the arch, one under the ball of your foot.”

Miho stepped up as he’d been told, holding on to other straps around to keep his balance.

Hevik adjusted the netting under his feet and pulled a large piece up over the front of him. He fastened it at intervals along Miho’s sides, holding him to the wall. He checked to make sure there was no way Miho could fall. Then he pulled Miho’s cock and balls out of one of the spaces in the netting.

“Now that’s a pretty piece of cargo,” Hevik said, smiling. Miho was gorgeous, looking all captured. He wondered if he could get the kid to sleep in the bounty cage and then decided he didn’t want to.

Miho strained against the webbing, moaning a little as he wound his wrists a little tighter in the webbing. His nipples were hard in the cold bay air, though he was warm enough to keep his cock from running away. With no further orders, he stretched and writhed in the bonds as though to put on a show for his Sir.

Hevik enjoyed the view for a little bit. “Hmm, needs a little something,” he said. He rummaged on Miho’s workbench until he found a pair of light-duty clamps. He tested them on the sensitive skin between his thumb and forefinger. Perfect. “Shh,” he soothed as he rubbed Miho’s hard nipples. He closed the clamps on one and then the other.

Miho exhaled, his eyebrows furrowing at the new stimulation. He shook a little as the clamps settled in, and his cock jumped. His mouth hung open, though no sound came out.

“That’s right, boy. Wakes everything right up, doesn’t it?” He stroked Miho’s hard cock. Then he wrapped a bit of memory-cord around it, passed it around his ballsac and brought it back between his balls, separating them. The cord stayed as he wrapped it, just tight enough to keep Miho firm. Hevik bent down and licked the head of Miho’s cock. “Beautiful boy. You’re doing just fine.”

Hevik stood back and looked for a while. He loved the way Miho squirmed. He watched the line of goose bumps grow larger. Pretty as this sight was, deep space was not the place for it. He disentangled Miho from the cargo net. “Come on, let’s get you warmed up.” He rubbed one finger over the tips of Miho’s nipples, still in their clamps. The high little whine from his boy made Hevik want to slam him into the wall and pound him right there. Miho’s hands made fists compulsively, as though fighting himself to stay exactly as he was told to.


Right now, Miho and Hevik are only available in ebook.
And if you leave a comment here, you'll be entered to win a free copy of it.

Enjoy and thanks for stopping by on the Blog hop!

Posted by Angelia Sparrow at 11:00 PM

Nice excerpt. I loved the way you developed toys and ropes etc especially for your story. Very cool!

Oh, my--please count me in!

@Shelly, glad you enjoyed it. We had fun doing it.

What a great excerpt. I would love to find out what happens next. Another book for my list.
debby236 at gmail dot com

Loved the excerpt! Can't wait to read Heart's Bounty, I love m/m sci-fis, and I love kink, so this sounds like the perfect book for me. :)

Debby, there's a great deal that happens next. And a fair bit that happens before: a week-long planet-wide rave, a battle to the death in an arena, broadcast on galaxy-wide pay-per-view, incarceration on an inescapable prison moon. It's a fun book.

Cornelia, Happily.
Hope you enjoy the rest of the book too!

Emily, the kink never gets too heavy in this one, but our boys do have a taste for it.

Sounds very inventive, Angelia. Space opera can be such fun to read and to write!