A death in the family

A headline, a map, a picture of the boss and a a cab and a terrible picture of him. 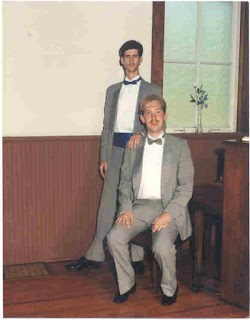 He was my husband's best friend through high school. He stood best man at our wedding. We talked often, even though I hadn't seen him in person since '94 (I was too pregnant to travel to his wedding). I was one of the few people who had his email address.

We quarreled, often. He mansplained. I outweighed him by twenty IQ points and was not afraid to use them. Somehow, we still managed to write a book together.

He was always there. And we believed he always would be. That deep, sexy voice, with laughter and a northwoods accent, on the other end of the phone.

I talked him through learning to use a word processor. He listened and served as a rant board for parts of my life that Mudd really didn't understand. My husband would stroke me and say "Do what you want and what's best for the story" on the writing. Darren would talk sense and get me over the rough patch. Even if his sense wasn't good sense, it let me refine my thinking enough that I could see the path.

He leaves behind a wife, both parents, a sister, at least one niece, a gaming group, his hetero life mate and our kids who called him "Uncle Darren."

As a friend of mine said, "Hit the Summerland running."

Oh no. I'm so sorry honey...sending love and hugs.