My Sexy Saturday: One Sexy Boy

We all know it just takes one sexy boy to get us going. That boy will turn into the man of our dreams. They can start out on the wrong side of the tracks, the right side of the tracks, the rich side or even the poor side. They can be good or they can be bad, we will love them all the same. They can space ship captains or one who is hired to protect us with their lives. They can be farmers and casino owners and the list goes on and on. But all of them started out as one sexy boy. They give us hidden looks, a longing gaze, with love’s promise shining in their eyes and all the things that come with love.  We love sexy and it’s always so fun to share.

One of the most beautiful of the beautiful boys who populate my universes is Niall O'Neill from the Cyber'verse. He plays a minor role in Hard Reboot. but in "Chained to the Wheel" in Storm Moon Press' Tall, Dark and Wriggly anthology, he takes center stage. 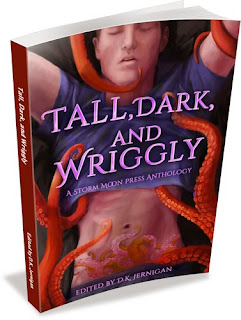 The Timberwolf tried another attack program, changing into an electric eel and using a modified Lightening program to assault the Wheelman. The trident he carried countered with an Absorption Shield. The electrical shocks from the eel streamed into the trident, which the Wheelman used to pin the slippery creature to the sand, twisting it until Niall's avatar twined around the tines like a strand of
spaghetti.

Niall made a motion that should have jacked him out, and then he saw the tracer flower, gray on the golden sand.

"I have your physical body, my boy. You might as well surrender here. I would prefer not to damage you by dumping you gracelessly back into meat-space. Why don't you jack out and we'll discuss this like civilized men?" He turned to Swift-Current. "Swim away, little fish. You have done your work well and will be rewarded."

The Wheelman slightly altered his appearance. Now, instead of a handsome merman, with a long, green-scaled tail, he was half-octopus, his tentacles writhing in the currents. He twined four of them around the eel, who changed back into a slightly hirsute merman, a look of resignation on his face. Swift-Current swam away as fast as he could flip his tail, his body a shimmery flash in the water.

"That's a good lad. You mustn't hold it against your paramour. He does serve me, after all, and you knew that when you agreed to see him." Two more tentacles slithered along the Timberwolf ''s face, and down along his tail. The Wheelman pulled him closer and stroked his face with a hand as well. "You are so lovely; I would prefer not to harm you. Come, meet me in the real and we shall determine what is to become of one of the most successful runners in the world."

Erik jacked out, coming back to his body, seated in its wheelchair. Before him, on his sofa, a lovely boy of Black Irish extraction lay, seemingly asleep. He was adorable, Erik decided. Dark curls framed a round face with delightfully pale skin. He wasn't tall or strong. This one led a sedentary life, but despite the nutritional deficiencies that were a hazard of his low class, the O'Neill parents had been fortunate enough to keep their sons fed adequately to avoid mental impairment.

Niall began to wake, his eyelids fluttering. Erik was going to enjoy this new toy tremendously. He stroked Niall's face. "Wake up, my boy. Tea is ready, and I am looking forward to meeting you."

The Other Sexy People: