We're pleased to have a guest here, taking tea in the Gazebo. I've known Elizabeth for 11 years now, and have enjoyed her work.  She's blog-touring right now, to get the word out about Nocturne Infernum.

Take it away, EKD. And mind the raisins, one's trying to crawl off the muffin. 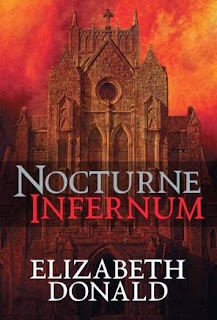 Horror is all about subverting people’s expectations. In most fiction, readers expect certain structures to remain in place. The good guys will stay good, the bad guys will stay bad, the couple in love will end up together and evil will be properly punished.

Horror turns all that on its ear. Sometimes the good guys are doing the worst things imaginable, while the bad guy’s argument has a solid point to it. Sometimes the couple in love gets separated by fate and never gets back together again. And sometimes, evil wins, and everyone left standing has to figure out what to do with themselves.

To that extent, horror is sometimes a more true representation of real life than any other form of fiction, even if it is the genre that focuses on snarly beasties and things that go chomp in the night. Real life is messy, and sometimes the ending sucks. Such as it is in horror.

Sometimes the horror is based on another reality, a fantasy world that operates by its own rules.

Magic exists, goblins lurk in the corners and if something’s out of place, a wizard did it. That can be fun, because any time you get bored, you can invent something to shake things up. Your monsters are wholly your own creation, and if you decide that they can change their shapes and fly as well, that’s your world.

Then there’s the horror based in our own world. It’s the icky germ that turns people into flesh-eating zombies, or the serial killer that skulks through the alleys outside the bars.

And what’s more, we writers know when we’re cheating. We just hope nobody notices.

My favorite kind of horror is the kind that falls in between real-world horror and the fantastical reality. By day, I write about real horror. I write about murders and car crashes and the mundanity of the real world. Most real-life violence is brutish and stupid, drunken fury that ends a life and leaves a perpetrator standing over the mess wondering what the hell just happened. It doesn’t make for good fiction, just nightmares.

But I never can get completely away from the real world. These days, horror likes to hide under words like “dark fantasy” or “urban fantasy,” as though the horrors skulking in city alleys need softer words to describe them. The Nocturne series lies between absolute fantasy and the real world by imagining an alternate version of reality: what if vampires walk among us, but they’re considered second-class citizens without the same legal rights as humans?

They work the night shift. They work the jobs humans don’t want because they’re too messy or too dangerous. They can’t get sick and they never die, but they’re very strong, so they make the perfect workers. And because they don’t have the same rights as the rest of us, you don’t have to worry about how they’re treated.

Melinda Snodgrass wrote it 26 years ago in an episode of Star Trek: The Next Generation, calling them “disposable people.” Of course, she was writing about androids – or was she? Haven’t we always had disposable people, doing the hard jobs on the night shift?

I based my alternate Memphis in the Nocturne books on the Jim Crow laws of the 20th century. Those laws created a legal structure in which two races had two different systems of justice, of society, of life and death – systems we are still unraveling today. And those stories don’t always have a happy ending, as we all know.

Horror is about more than the thing crawling under the bed or the guy with the knife in the alley. Horror tells us things about ourselves, often things we don’t want to know. And if you can’t guess the ending, we have done our jobs as horror writers.

Elizabeth Donald is a dark fiction writer fond of things that go chomp in the night. She is a three-time winner of the Darrell Award for speculative fiction and author of the Nocturne vampire mystery series and Blackfire zombie series, as well as other novels and short stories in the horror, science fiction and fantasy genres. She is the founder of the Literary Underworld author cooperative; an award-winning newspaper reporter and lecturer on journalism ethics; a nature and art photographer; freelance editor and writing coach. She lives with her husband and her son in a haunted house in Illinois. In her spare time, she has no spare time. Her latest release is Nocturne Infernum, a trilogy of vampire mysteries set in a dark alternate Memphis.