My Sexy Saturday: Talk Sexy to me

We know all about talking sexy to me. We know that lovers have a special language that only two of them share. The hidden looks, the longing gaze, the love shining in their eyes all accompanied by those sexy, sexy words. Sometimes, they are whispered, sometimes spoken aloud and occasionally shouted from rooftops.


All this month, I will be promoting Terror of the Frozen North 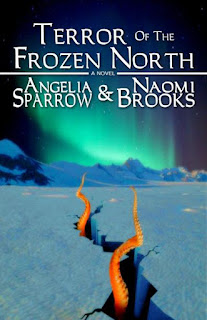 When Edward Kilsby, Lord Withycombe is blackmailed into an arctic expedition, all hell breaks loose.

Nigel hovered at Edward’s side, his seductive whisper weakening Edward’s last resolve even further. “I always know what you need. I’m the only one who ever stopped the nightmares. Sarah couldn’t. All the women you bought couldn’t. Even your dear American can’t.”

“Don’t what, love?” Nigel’s hand clamped hard on the back of his neck, his slim fingers stronger than they looked. “Have you forgotten how this plays out? Mine, darling Edward, and you do as I say.” The little man’s grip tightened uncomfortably until Edward set his jaw against the pain.

“Don’t talk about Charles,” he said, turning on the bare electric bulb. A set of manacles hung from one bare wall, their key on the same hook as their chain, and a cabinet stood near them.

“To the wall, Edward love.” Nigel gave him a shove and released his neck. “Let me stop your nightmares.”

Edward cursed his own weak will with each step that took him closer to the manacles. Someday, the War would be over inside his head as well as outside it. Someday, he wouldn’t need this. The
promises he’d repeated to himself over the last five years seemed thin and fragile, dreams to be blown away in a puff of breath. He stripped off his clothes, locked himself in and watched Nigel
rummage in the cabinet.

“Ah, that’s the very ticket.” Nigel pulled out a cat-o’-nine-tails and tested it on his own thigh.

Nice snippet and their conversation makes me wonder about their history. Thanks for sharing and being part of My Sexy Saturday.

Nigel and Edward flew together in World War I (the War). After the war, Nigel served as Edward's secretary. As Nigel says later to Charlie (the dear American), "We're at that late stage of a bad marriage where all we can do is hurt each other, no matter how much we once loved."