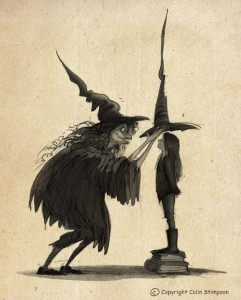 All the elder djinn said he would come to bad end and it was his grandmother's human blood making him such trouble. None of them were surprised the day he was taken.

Arqam had ventured far to the east, leaving behind the sand and oases of his native Arabia, into the lush jungles of India, where the foreign white men ruled the local people. He listened to the clipped accents of the English, the soft music of the Indians. He peered into bungalows and huts, disregarding the privacy of Her Royal Majesty's Major General and the lowest of the pariahs with equal aplomb.

He watched the brown women in their colorful saris and the pale ones covered and corseted and fainting in the heat. He watched the men as they worked. In time, he grew sleepy and made a hammock of vines near the outskirts of a small village.

As he lolled in the steaming night, a distant cousin found him. “Arqam,” it hissed, its low guttural voice making him uneasy.

“Yes?” He peered over the edge of the hammock and saw what had addressed him. Although ghuls were a sort of djinn, Arqam's people had little contact with them. They served Iblis and haunted the graveyards. His folk lived invisible in the air. Arqam looked around but saw no graves. “May I help you, cousin?”

“I am Shahib, the fire that consumes the dead. Why do you wander so far away? No mind, all have heard of Arqam, how he sticks his long beautiful nose into every house and everyone's business.” The ferocious little grey thing crouched beneath his hammock. “I'd check your curiosity soon enough, pretty cousin.” Shahib's laugh was ugly and he batted at the hammock.

Arqam did not move from the hammock. As long as he stayed within, the protective spells would not let Shahib touch him. Shahib tried again, and the breeze of his hand's passage disturbed Arqam. Arqam looked down at the hideous creature, grey and snarling beneath him, its corded arms too long, like a hyena's front legs.

“Leave, Shahib. Follow the vultures and find some carrion. You do not feast upon djinn this night.” Arqam rolled over and pretended to sleep.

From below him, he heard the evil chuckling of the ghul. “A pity. It is said the djinn know more of congress than even the sensualists of India. But I do not tempt you, my pretty cousin.”

Arqam feigned sleep. He felt the hammock quake where Shahib shook one tree as he departed. But he remained safe, and in time, he fell asleep.
Posted by Angelia Sparrow at 4:33 PM