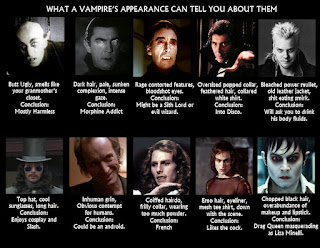 Your Pic of the Day

Your Video of the day

Vampire week continues with "Hunger for the Edge." This is available in Into Dark Waters


The next night, Adrien was loitering against the wall outside of Egypt. He was well-fed, warm and content looking. His shirt was a silvery blue which made his eyes look almost gray He was patient. He'd been there for most of the evening, listening to the crowd, smelling them, enjoying being among people once more.

Zach came late, held up at work. He caught a glimpse of dusky skin and a silvery blue shirt as he walked up, very quietly, behind his evening's appointment.

"Didn't think I made any noise," Zach grumbled.

"You didn't. I smelled you. So it is you who are rude tonight?"

"Approaching a blind man from behind is not wise, nor is it polite." Adrien's tone was mildly chiding but nothing in it said Zach wouldn't be getting laid.

"I apologize. But since you smelled me, I don't think I've put you out any."

"Not at all." Adrien wrapped an arm around his waist. Unlike last night, he was warm, feeling almost flushed.

"Did you eat?" Zach asked, stroking his face, feeling the unusual warmth in it.

"I ate. I may stay as long as you like." Adrien smiled and pressed up into Zach's hand.

"Coming home with me?" Zach asked, gently starting toward the car without disengaging from Adrien.

Zach led him to the Jag and watched as Adrien groped around the edges of the door, not quite able to find the handle. Finally, Zach opened the door.

"Ah, thank you." Adrien slid in gracefully, settling himself in the low-slung seat.
As he walked around to his own side of the car, Zach drew a small knife from his pocket. He winced as he made a shallow cut, just deep enough to bleed freely, across his arm before getting in.

"You are, I can smell it. It's just a small cut. Are you all right?" Adrien sounded very worried. "Did you catch yourself on the car?"

"I'm fine. Do you like the smell?" Zach put his plan into action.

Adrien drew back a little, eyebrows furrowed over sightless eyes. "What are you talking about?"

"I'm on to you." Diplomacy, to Zach, had always been a mealy mouthed way of avoiding the truth.

"I did intend to have you on me tonight, yes." Adrien tried to change the subject.

"You know the other senses overcompensate," Adrien said.

"Not to this extent," Zach countered.

"And surely not so mysterious. You've had lovers refuse to eat with you before, I'm sure. Special diets make other people uncomfortable."

"I know what you are," Zach persisted.

"Other than a blind creole who gives amazing head?" Adrien licked his lips hoping to move into safer topics.

Adrien laughed. He laughed until the car rang with it, until he was clutching his sides, gasping for breath, the tears running from his eyes. "Have you the first idea how ridiculous that sounds? This is the twenty-first century."

Zach shrugged. "And there are stranger things out there."

"Vampires are the silly superstitions of medieval peasants to account for plagues and natural decay processes."

"It destroyed your sight, didn't it?"

"What? Are you still claiming I'm a vampire?" He hadn't stopped laughing and was clutching the hanging strap over the door to steady himself.

"There are no such things. Do you hang your windows with wolfsbane as well?" Adrien wrapped his arms around his ribs, aching from the laughter.

"I thought dying was not part of your grand plan." Adrien flashed his fangs at Zach. "If you are bored living as a mortal, how much more bored will you be dying eternally?"