Lovers and other monsters

In honor of my oldest announcing her engagement, it's all romantic today...

Pic of the Day: 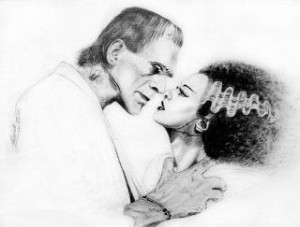 Sound of the Season:


Excerpt of the Day. From "Siul a Ruhn" in Howl at the Mistletoe. (limited supplies)

We stepped into a great clearing of moss-covered stones and straight aspen tress. The twilight filtered in, making the place look like a cathedral, one to whatever god watched over woodland creatures and werewolves. Cian laid his hands on a large clear boulder that stood at the bottom of the sloping glade like an altar.

I looked at Dan and he took my hand, nodding. A few months ago, I'd gotten ordained over the Internet on a whim. I suspected Dan had told our friends. I'd never expected to use it. Now I looked at Cian.

“This is perfect. Can you marry us? I'll do the same for you.”

Cian smiled and I could almost see that faint silvery shimmer that marked him as half-Sidhe. He nodded and beckoned us. Still holding Dan's hand, I walked to the altar, Without thinking about it, Dan and I went to our knees facing each other.

“We are here, tonight, to enact the age-old joining of two hearts and lives,” Cian said, his voice ringing through the trees as if the glade was full. “Mating, for wolves, is a life-long pairing. Mother Moon sanctifies the mating, not we mortals. We ask her blessing here tonight and that of all nature as well. Danior, do you take this one to be your mate and alpha wolf? To love him and run with him, to live with him and care for him, until the day you return to Mother?”
Dan clasped my hands a bit tighter and nodded. “I do.” His large eyes were full of his love for me and I knew this was the right choice.

Cian looked at me. “Paul, to be an alpha is a serious thing. It is to take responsibility for another's health and welfare all of your life. It is to put his needs before your own; to set his happiness higher than yours and to love, endlessly and unstintingly, until death takes you. Can you bear this burden?”

I looked into Dan's face and smiled. My Furball, big eyes and dark hair, short beard and laughing mouth, and behind it all the sharpest mind and biggest heart in the world. “I can. More, it's all I've ever wanted since I met him.”

“Then take the ring,” Cian looked at us, “You have a ring, aye?” I slipped it off Dan's right hand. Cian smiled more broadly when he saw it was a claddagh. “Take the ring and put it on your mate's hand, repeating after me-”

I followed his words, meaning every one. “I, Paul, take you Dan, to be my mate and love. To live with and love, to protect and honor, in all ways and places, until death takes me.”

Dan said the words back, putting the ring on my left hand. I was shaking by the time he was done. This was the biggest thing I'd ever done. More important than designing the county prison. Bigger than drafting that office building. Better even than saving the whole of existence.

“Now seal your pledges with a kiss, lads, and know you are blessed.”

I took Dan in my arms, kneeling there on the green moss in the fading light. The courthouse, our friends, everything faded before that reality. Him, me, and one perfect moment when our lips met and the realization struck us that we were bound together, mated as men and wolves until the end.
Posted by Angelia Sparrow at 4:23 PM