Power in the Blood 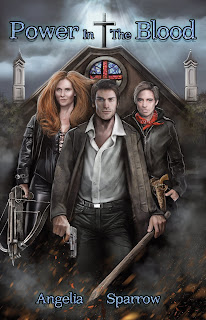 Oren Stolt understands the natural order better than most people. Vampires prey on humans and Undying keep the vampires' numbers in check.

Now, across the United States, vampire numbers are exploding, thanks to a new church. The Tabernacle of the Firstfruits preaches a Risen Lord and invites believers to follow Him in death and resurrection... quite literally.

In Memphis, the church is about to host its first conference, with an eye to converting the whole world to the vampiric gospel.

And all that stands between humanity and eternal night is Oren, his kids, and a thin line of insane immortals.
Posted by Angelia Sparrow at 5:32 PM No comments: