My Sexy Saturday: Our Sexy Life

You’ve seen these characters. They are the founding couple of a pack, an investigation unit, a rag-tag bunch of soldiers out to save the universe. These are the ones readers can’t get enough of and want to know what happens to them even if they aren’t the couple in the forefront. Share with us those sexy couples and let us know how their happily-ever-after stacks up against the rest of those couples out there.

There's only one couple suitable for this...
And alas they don't end well at all.  (This may change. Niko-Chan is getting a total rewrite after we finish the book that belongs between it and Nikolai) 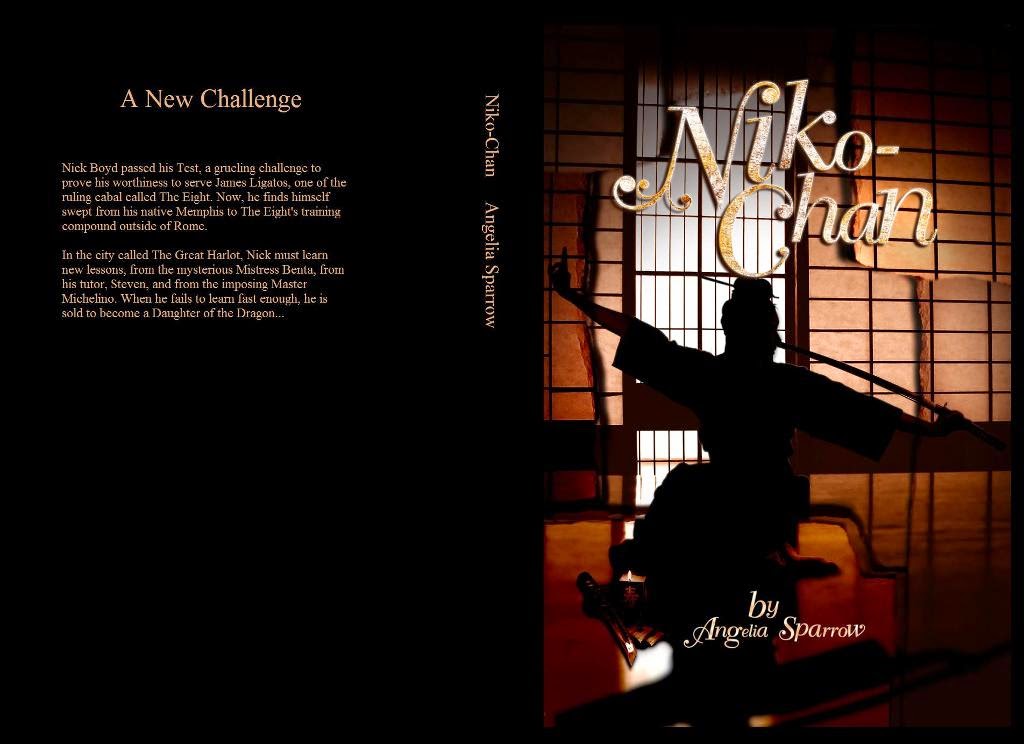 From Niko-Chan (Out of Print):


"Valerio, lovely, did you really spend your life-savings on me?” He bit his lip as Valerio nodded and popped the beer. David bent in and kissed his cheek. “Would you like them back? Here, in Europe, I have
several fortunes. They do me no good as I am.”

"No regrets. Yer worth it,” Val said, taking a drink. He ducked out of David’s arms and went
to sit.

"A quiet arrangement, man to man. I reimburse you, you keep me." David sounded almost
pleading.

Val shook his head. David kissed him again, his mouth soft on Val’s. Val took control of the kiss, hungry for the taste of his man. He set the beer down and ran his big hands over David’s body.

"Yours,” David whispered. Val kissed him again, harder, splitting his lip until they both tasted blood. David moaned and pressed closer. When Val released him, he stripped out of the whites, very fast, standing before Val in only the collar.

"Want you. Too much, sometimes.”

Posted by Angelia Sparrow at 3:00 AM No comments:

Spellbound Desire is out in print today from Ellora's Cave.

Come help P.I. DJ Admire and combat mage Bran McKay save the world from a demon in charge of oath-breaking. 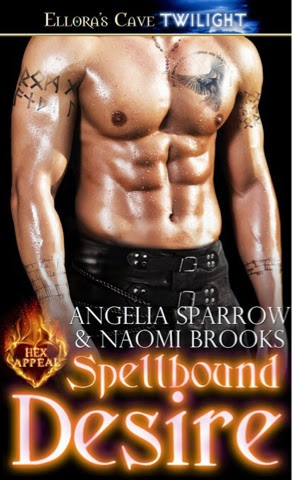 On Facebook, I was tagged to List 10 books that have affected you in some way. They don’t need to be the ‘right’ books or great works of literature. Tag 10 friends including me: (Basically, if you want to do it, TAG)

1) Julian May's Pliocene Exile series (all 4 books, but especially The Many Colored Land) We just figured out how much this influenced my Eight Thrones series. She also introduced me to gay characters as part of the landscape. From riverboatmen to nuns to aircraft engineers, they were everywhere.

2) Edgar Rice Burroughs Mars series, the first three, and Mastermind of Mars. There is more than a little of Ras Thavis in my Davids.

3) Brian Dailey's Han Solo trilogy. Taught me about writing action, backstory and generally how to keep a plot rolling.

4) Friday by Robert Heinlein. Lots of worldbuilding here that has influnced a great deal of my own future visions. Like many SF geeks, I suffer from Heinlein damage and think polygamy might not be terrible if you can pull it off.

5) The Windflower by Laura London. My favorite pirate romance ever. Also my first introduction to subtext.

6) Brave New World by Aldous Huxley. I never read this as a dystopia. Everyone had a job they were well suited to do. Plenty of sex, plenty of entertainment in a world free from pain, illness, poverty and age. I'm glad I'm a Beta...

7) 1984 by George Orwell. The big bad granddaddy of all dystopias.

8) The Stories of Ray Bradbury. The man is a master of horror, SF, and even slice of life. Everything I know about writing short stories from this and 9. I can still quote a great many of them. And I am overdue for a re-read

9) Strange Wine by Harlan Ellison. Brilliant, angry short story writer. Ellison engages love, death, terror and modernity in this collection. "From A to Z in the chocolate alphabet" is my favorite.

10) The Stand by Stephen King. The post-apoc book that started it all. I learned more about human nature reading this book than I did in 2 semester of psych class.

Honorable mentions:
Lord of the Rings
The Chronicles of Narnia
Calvin Miller's The Singer, The Song and The Finale
A MidSummer Night's Dream
The Myth-Adventures of Aahz and Skeeve
Ray Harry Harrison's Deathworld Trilogy
A Stainless Steel Rat
The Dragonlance Twins trilogy
Slavegirl of Gor. (bad influence. I threw it across the room, announced I could write better smutty fantasy and DID)
Against Our Will: Men, Women and Rape by Susan Brownmiller (not one of the better places to get your sex ed)
The Hite Report on Female Sexuality (I know, I know, terrible methodology, but a revelation to an isolated bi-girl in rural 1980s America)

Posted by Angelia Sparrow at 11:03 PM No comments:

A year ago, August 1, Naomi and I petitioned Ellora's Cave for our rights back. Last spring, they gave back "For Love of Etarin," and "Raising the Dead."

Yesterday, they gave back Heart of a Forest, Privateer's Treasure and Glad Hands.
If you want these in their current form, click the cover. Glad Hands is already gone 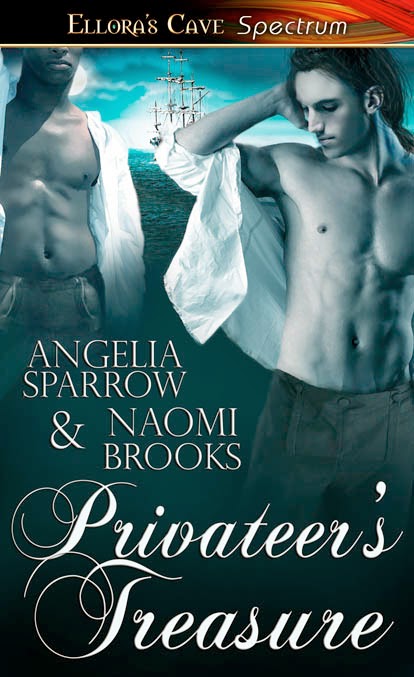 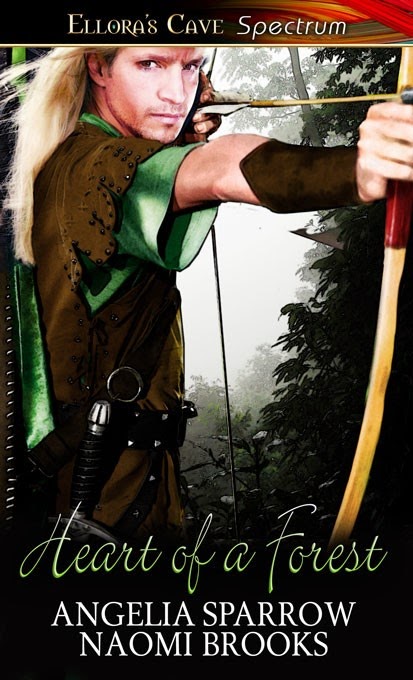 Glad Hands will be given a new cover, some corrections will be made and it will be re-issued where it belongs, as Book Three of the Eight Thrones Cycle.

Heart of a Forest will also be re-issued, with a new cover and some edits.

The privateer ship, Kestrel, however, is sailing into mothballs until after the first of the year. Naomi and I will decide then what to do with it.

Now, for Spellbound Desire so I can get DJ all under one publishing roof.  And Heart's Bounty, to round it out. I'd really like "Cherry tart" back so I can do a steampunk collection, but they'll hold that until the eagle screams. "Eight Days Ablaze," not much attached to.
Posted by Angelia Sparrow at 7:08 AM No comments:

I watched House of the Long Shadows (1983) last night. It's the story of a writer who makes a bet with his publisher that he can write a book (20,000 words in the original George M Cohen play, which I have stage managed) in 24 hours. Desi Arnez Jr. is the writer. Richard Todd is the publisher who packs him off to a deserted manor house to write. And Wackiness--of the sort that involves John Carradine, Christopher Lee, Vincent Price and Peter Cushing--ensues.  It's the only time those four gentlemen ever worked together, and the last time Lee and Cushing worked together.

And it struck me watching how much Vincent Price there is in David. Davids are always John Glover in my head, a function of combining Smallville and Brimstone. But there is a LOT of Vincent's attitude, mannerisms and even his queenliness. Because when Vincent--who was bisexual in real life--takes it into his head to swish, he does so in grand style. (The movie above is worth watching for no other reason than the tiff he and Lee have at the end which has Price flouncing off with a catty, "bitch" thrown over his shoulder at Lee)

I mean who else could deliver the line "Don't interrupt me when I'm soliloquizing!" and make it convincing? Those two gentlemen alone, I suspect


I got to thinking, as today entailed much driving. What would the cast of Nikolai look like in various cinematic eras?

The answer is a pic heavy post at my LJ.

Posted by Angelia Sparrow at 10:26 PM No comments:

How I spent my summer vacation

Except for the part where it wasn't a vacation.

In February and March, I completed my 13th novel, Anthony, the prequel to Nikolai. It is in edits now.

In ensuing months, there has been a Nikolai rewrite, tying in the new character and making a lot of changes, mostly to Tanis, whom I have never liked and who always seemed too unstable and self-indulgent to be part of the secret rulers of the universe.

And last night, we started Master Anton, the book that needs to happen between Nikolai and Nikochan,
in which the Disunited States goes to hell and James loses his mind.

(this in addition to finishing my 14-16th novels, and editing a short story, writing a proposal for another and working two jobs)

The new edition of Nikolai is called Nikolai Revenant. It will be offered free for a brief period so that loyal readers may replace their outdated copies. 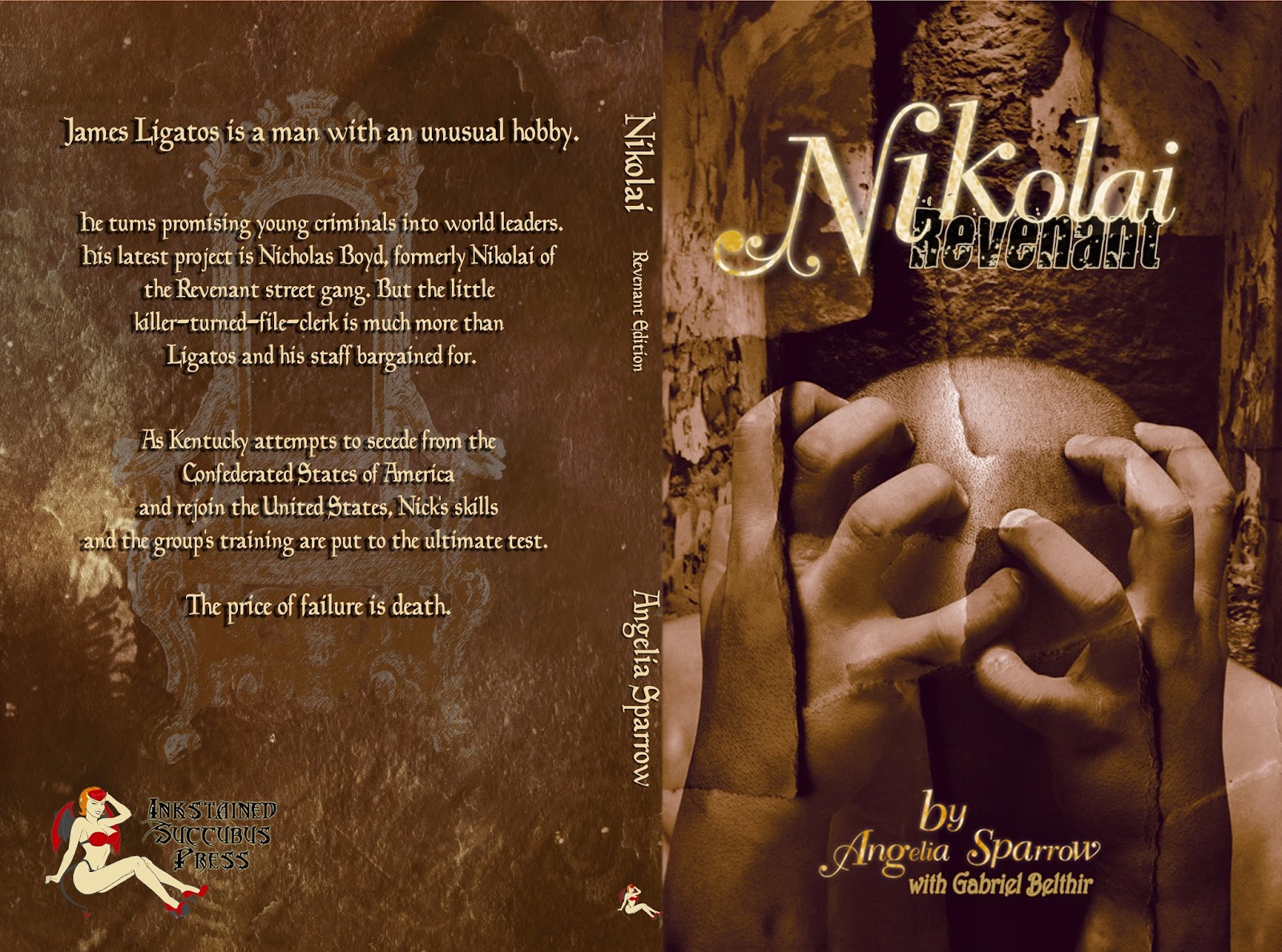 Posted by Angelia Sparrow at 11:44 AM No comments:

Here's How To Play


1) Go to Silver Anniversary Extravaganza Dream Making Post and decide which of our lovely showcase prizes suits you best. Non-US folks, you can play too. (I do not trust the coffee mug to international mail, however) Fair warning: this puts you on my holiday card list and my newsletter mailing list. (which comes out about every 2 years)

2) Leave a comment here: http://valarltd.livejournal.com/2025754.html  DO NOT COMMENT HERE AT BLOGGER
All comments at LJ are screened. Leave your name, your email and your top three to five prize choices. If you have a physical object, leave your mailing address. Nobody can see this but me.

3) Wait. I will send ebooks tomorrow, and the physical prizes I have on hand. The bookmarks may take a bit. I stitch slowly.
Posted by Angelia Sparrow at 12:04 PM No comments:

These are the prize packages for the Silver Anniversary Extravaganza

Comments are to be made on August 5th. A link to that post will be provided.

There are also 10 ebooks of your choice, with hand-made bookmarks. 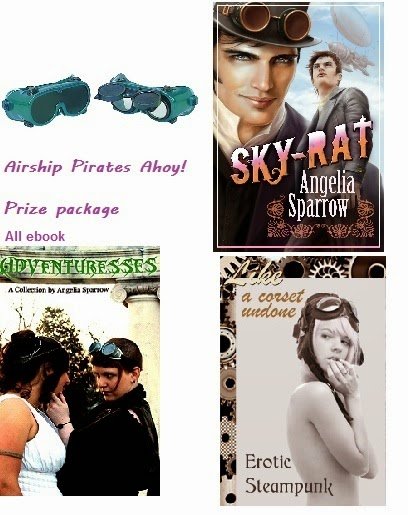 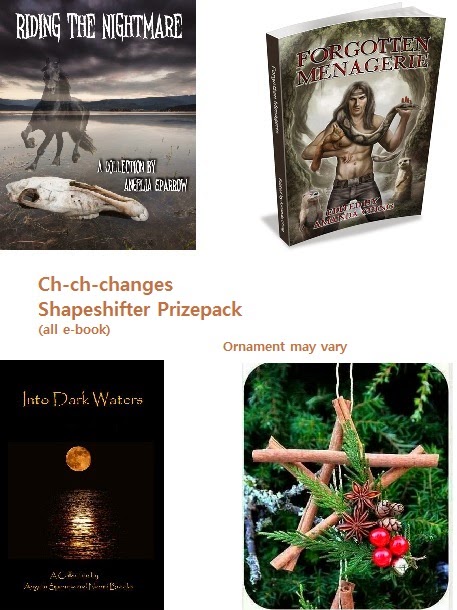 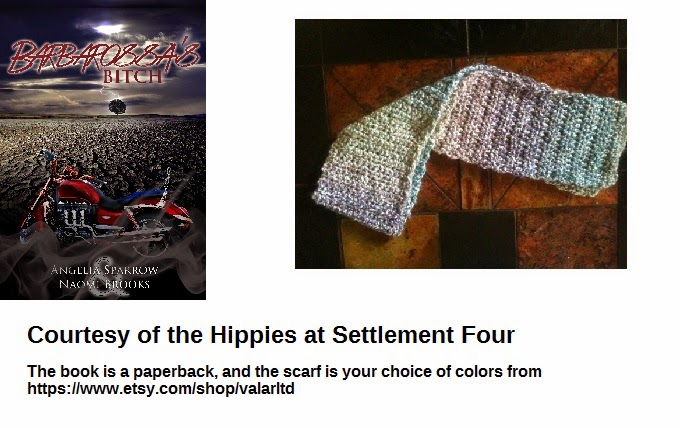 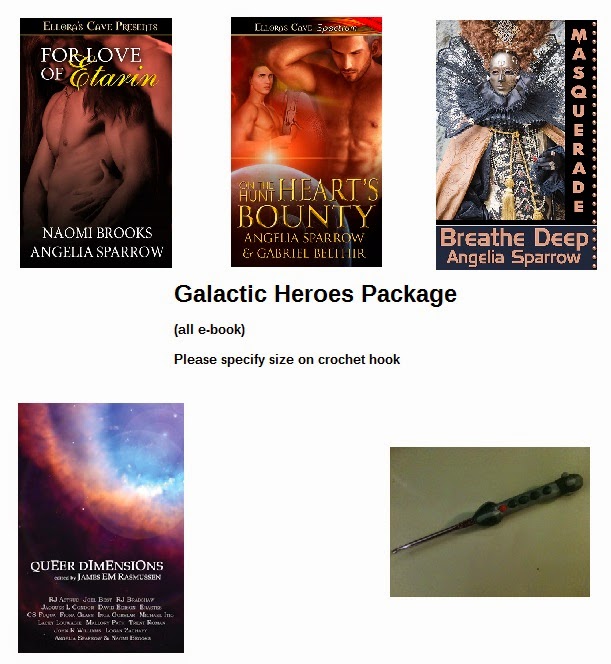 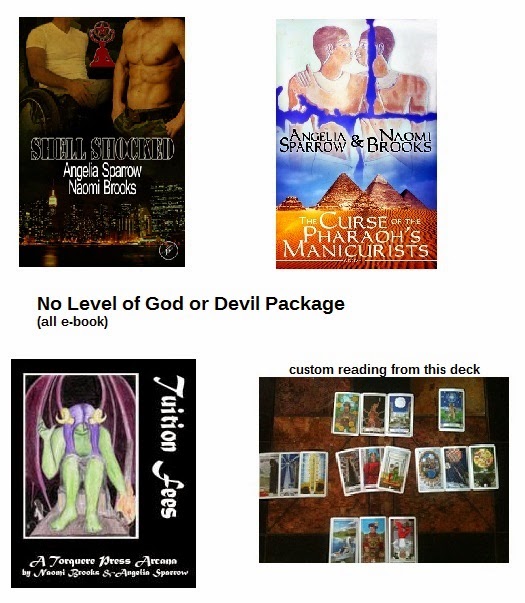 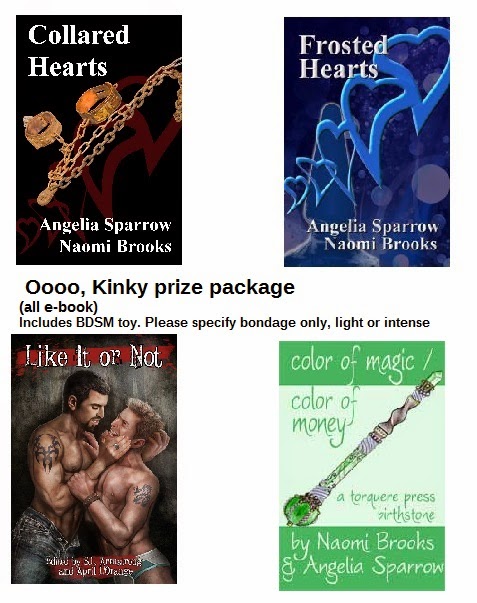 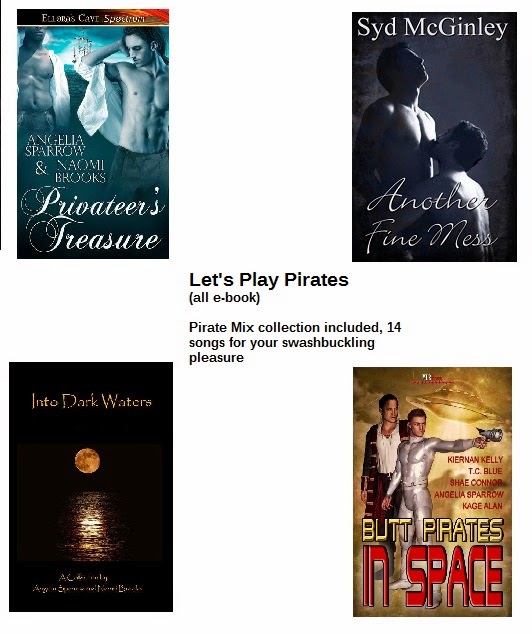 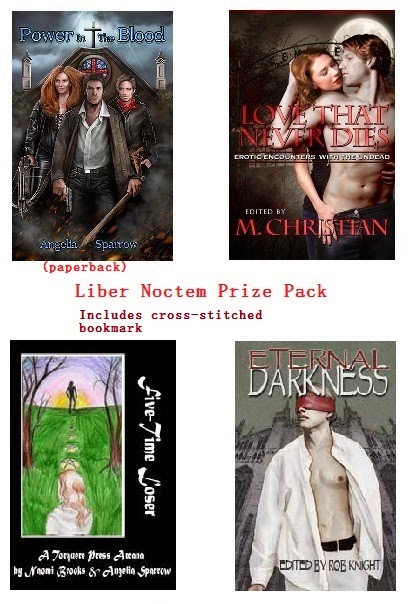 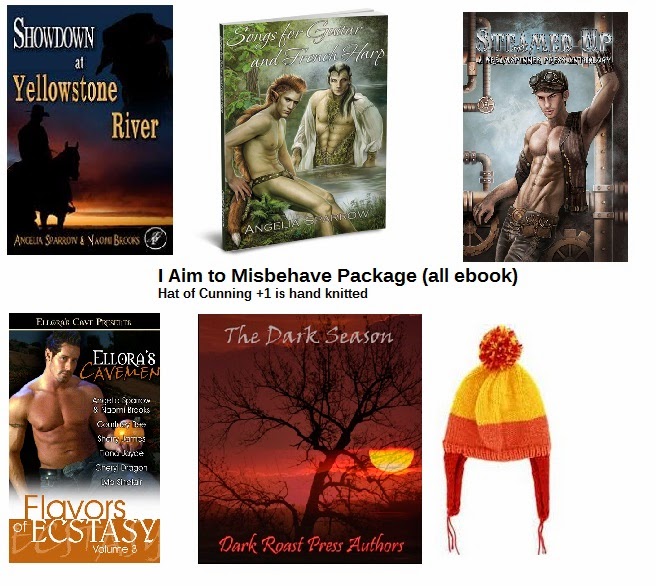 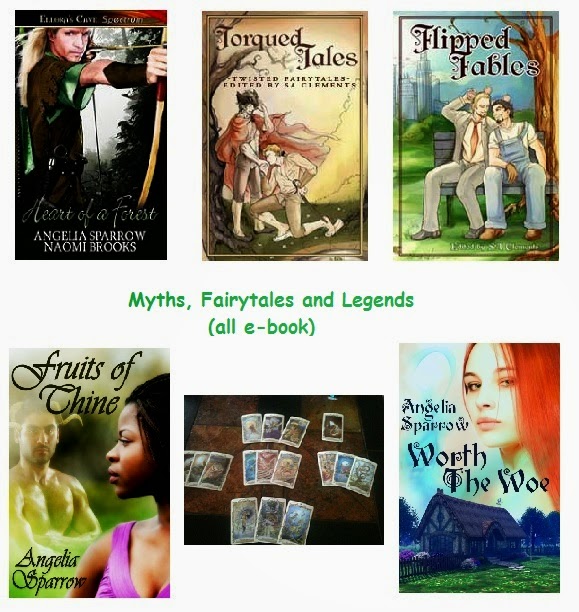 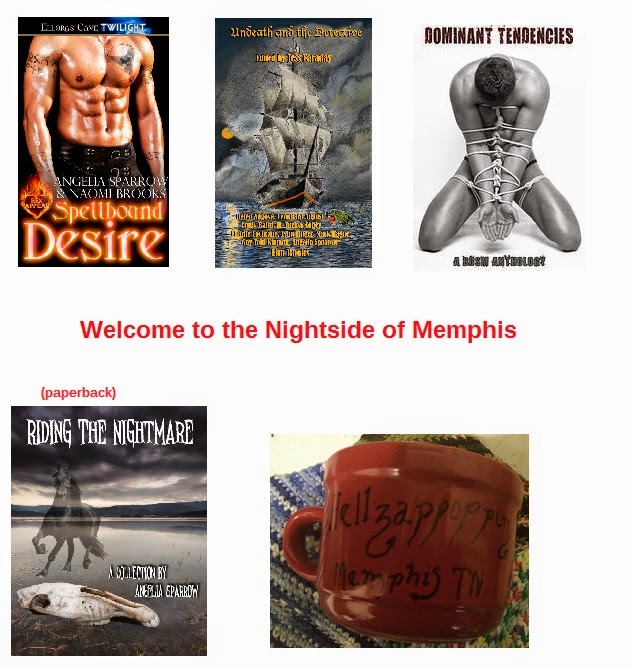 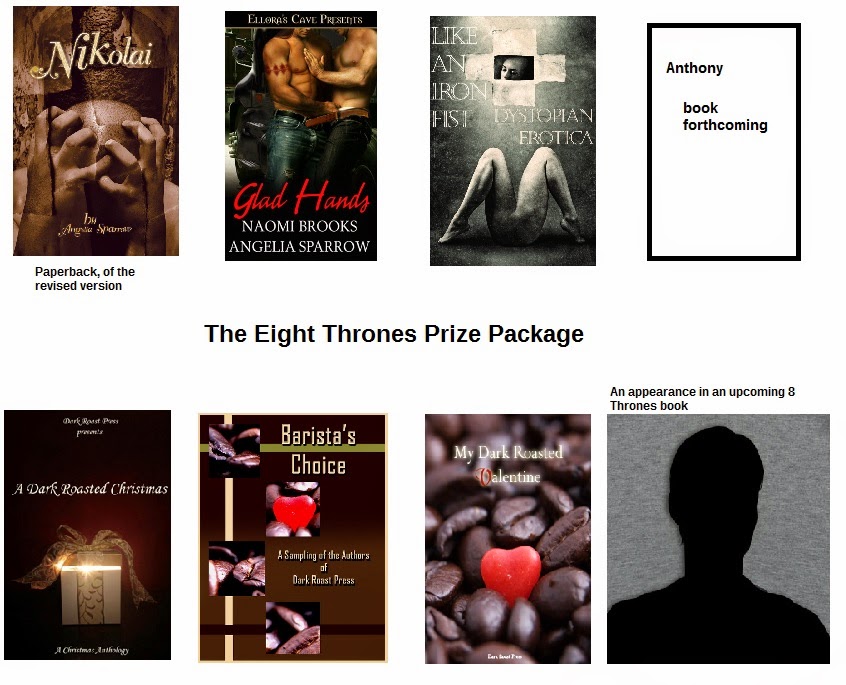 Posted by Angelia Sparrow at 12:44 AM