I have been married for 25 years. This calls for a party!

On August 5, my anniversary, you will go to my Livejournal (I can screen comments there and keep your contact info safe) and tell me what you would like to have.

First claimant gets the prize, so have a couple of alternates.

Keep watching for more information!
Posted by Angelia Sparrow at 10:51 PM No comments:

I've known Mary for a number of years and published several pieces through Pink Petal Press/Jupiter Gardens. Welcome her to have tea in the Gazebo and talk about:

Another week in the blogosphere, word of yet another publisher folding. Some go quietly. Some go with large implosions that seem to last for weeks and spew much vitriol across the internet. No matter how it happens it sucks for the authors, and those of us who have seen it happen or been through it feel for them.
Yet authors can protect themselves, and I am still surprised that some choose not to. Of course, no matter how diligent the research things can happen. Nothing is a perfect safeguard. Yet, a bit of legwork before the submissions process can save a lot of stress down the road.

The first step in researching publishers should always be checking sites like Absolute Write, Preditors and Editors, HiPiers (Piers Anthony’s site), EREC, and other watchdogs. Because it is possible for false reports to be filed, each step in the research process should be taken in conjunction with the others. This means if one site shows a problem, but everything else checks out, and the problem appears to be isolated, an author may choose to go forward. For some authors, even one report is one too many, and I confess that I fall into that camp as well.

Next a targeted web search should be completed. Researching the publisher’s name is one thing; however, the smart author is looking for specific items. Looking for the publisher’s name in quotes plus the word problems or issues will showcase those specific blogs or articles. Additional credence needs to be given to those mentions in high visibility places like Publisher’s Weekly, Locus, Dear Author, or other large industry blogs or magazines. Again, a single author’s problem may be something very specific to that publisher-author relationship or it may herald a bigger issue. Sometimes it is difficult to tell and authors will need to use their own judgment.

Asking for references, reading books, and even a perusal of the publisher’s website and social media platforms are all great next steps to take.

Why am I saying that authors should do this for their sanity?

Because let’s face it, many of us put a lot of time into our books. We write our first drafts, edit, polish, and tweak some more before we send the book off to a publisher. We’re signing contracts for as few as a couple of years or as many as seven. That’s a long time to be stuck in a bad relationship. And no, it doesn’t have to be a bad relationship; that’s why authors need to research publishers. A bit more forethought and a slower rush to get published will help save authors from a lot of difficulties and give them a solid foundation upon which to build their careers.

If you’re interested in learning more, join Mary starting August 20, 2014 for Smart Publisher Evaluation for Career-Minded Authors. This week-long course will dive deep into the art of evaluating publishers so authors can avoid trouble, find the best fit for them, and know that they, and their work, will be supported. Learn more and register here: http://musecharmer.com/musestore/index.php?main_page=product_info&cPath=75&products_id=212

Bio: Mary lives in the Ozarks with her husband, three spoiled horses, an office rabbit, an opinionated parrot, a not-so-itty-bitty kitty committee, and a charmed chicken (rooster). She’s been published since 2002, working for some of the biggest and best digital-first publishers. Three years ago, she began The Muse Charmer to share her insights from being in the publishing industry for so long with authors. Her belief: it can be easy to be an author today. To that end, she offers classes, news, and information authors can use to navigate today’s ever-changing publishing industry.

Visit her website at www.musecharmer.com to get her free video presentation Tap Into Your Muse Power to learn exactly how an author’s muse is the most important tool for today’s working author.
Website: http://www.musecharmer.com
Twitter: http://twitter.com/harmoniczen
Facebook: http://www.facebook.com/musecharmer

Posted by Angelia Sparrow at 5:00 AM No comments:

My Sexy Saturday: One Sexy Year

This week, all we want you to do is to share a sexy tidbit about anything your heart desires. And you all know what we mean…don’t you?

From Alive on the Inside: 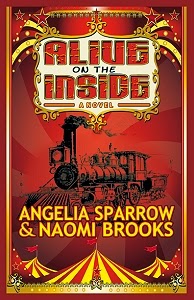 Blurb:
Nick Harper has a nice life, a nice job, and a nice girl. Until Labor Day Weekend, when the Phantasmagoria Traveling Wonder Show comes to town.

And Nick's changes are just beginning...

Torturo moved closer to him and ran a hand down his face.
“No need to be so jealous. There’s plenty more if you’re wanting
it.” Before Tom could react, Torturo kissed him, just to give the
boy something to think about. He stifled a smile when Tom opened
up to him at once and he heard a soft whimper.

He did smile when he pulled back. He winked at Julian and
raised an offering eyebrow to John. “Anyone is welcome to play.”
The three boys turned and showed their heels, fleeing into the
safety of the darkness. Sin looked up at him, her honey-colored
eyes adoring.

“That…” She flushed. “That was the sexiest thing I’ve ever
seen.” She took his hand and let him help her to her feet, clearly
hopeful he would kiss her, too. “Thank you. They’re a pack of
jackals and I’m the weak antelope at the edge of the class herd.”

He shook his head. “Not so very weak at all. Far braver than
any of them. You see what you desire and acquire it. They simply
look and want, constrained.”

Since she looked so expectant, he decided not to disappoint her.
He drew her close with one arm around her waist and tipped her
face up with his free hand. She wrapped her arms around his neck
and pressed her breasts against him. He gave her the lightest of
brushes, just enough to get a feel for her lips. She looked
disappointed when he eased away.

“That’s it? You French that creep and all I get is that little
peck?” She seemed to be working up to a full mad. He pulled her
in tightly and laid one finger across her lips.

“Sin, to kiss you properly would spoil all the delightful
anticipation. And the way I plan to kiss you is certainly not
appropriate for the middle of the Midway, which you seem to have
forgotten.” He smiled and stroked her lips with that finger. “I
promise, you’ll have all he did and more, in due time.”


Posted by Angelia Sparrow at 3:00 AM No comments:

The Dog Days of Summer are almost upon us.

And that means the Mad Dogs and Englishmen Summer Spectacular at Inkstained Succubus.

Also, Mudd and I have been married for 25 years next month.
So that calls for a Silver Anniversary Special.

It all starts August 1!
Posted by Angelia Sparrow at 9:11 AM No comments:

My Sexy Saturday: One Sexy Lady

Share with us this week those women aren’t afraid to show that they love someone. Pepper their existence with a clandestine rendezvous or a weekly event, show us why we love, love, love them. Share those scenes with us this week. From the moment our sexy lady meets their significant other, their first hot kiss, to the fulfillment of a dream, show us the wonders of finding, falling in love and loving your significant other.


This week, from Fruits of Thine 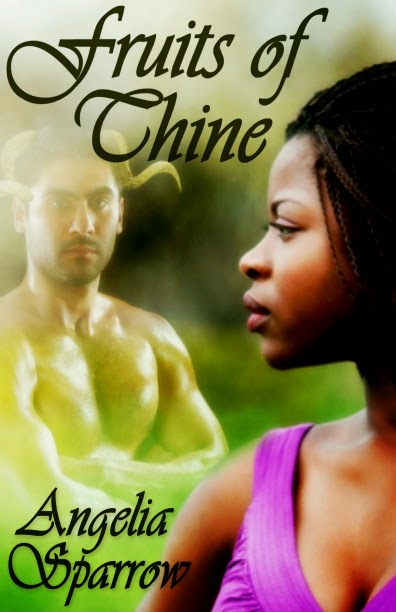 Blurb: Corporate retreats are dull at best, but when Carla is sent on one as a punitive measure, she isn't expecting anything to come of it, except a pink slip.

High in the Ozark mountains, nothing is quite as it seems and reality skews in interesting ways. The conference is too elementary and Carla notices people starting to go missing.

And the wild, incessant piping from the forest keeps her awake nights and stirs deeply buried desires...

Clara sighed. “I had to decide whether I wanted to do this or not. This is so wrong on so many levels. I mean, you’re not even human.”

“Not beast, not god and yet not man,” he chanted. She wondered if it was part of a hymn to him. “Have you decided, lovely lady?”

Clara took a deep breath and looked into his liquid brown eyes, so hopeful and trusting. Telling him no would break his little goaty heart. The look of mischief that wrinkled his nose and titled his mouth ruined the effect. She laughed and decided.

“Yes. Yes, I want you. You’re beautiful and sweet. You’ve been sending me sexy dreams and making me feel less alone out here.”

Pan kissed her again, and she responded, showing him how she liked it, gentle, but firm. He filled her mouth with his tongue and then nibbled at her lower lip. Before she could protest, he pulled her close, in a superhumanly strong grip and kissed her hard, ravishing her with his mouth until her breath came fast and
shallow.

“That’s the lady I’ve been watching,” he teased. “The one who glides about her day, half dancing, although there is no music. If I played, would you dance for me?” She looked him over and pushed him back to the grass. He gasped. “Women have changed a bit.”

“A bit,” she allowed. And she pounced on his mouth, running her hands over the dark, velvety skin and soft hair of his chest. Tiny whiffs of air across her cheek told her he was laughing into the kiss.

Posted by Angelia Sparrow at 3:00 AM 3 comments: