Extra Kid needs a hand up

All right, Fiends and Neighbors, you know I have lots of extra kids.

Right now, I have one who is need of some help. Imani is couch surfing, unable to afford to go back to college, not finding work in our depressed economy. But he hasn't let this stop him. He's all set to go to truck driving school, which will get him a CDL-A, and promises a job after graduation. (They have lifetime placement. In a year *I* can check back and they believe they can get me a job!) Being OTR will let him have a place to live while being gainfully employed.

But!
There is always a but.

We need to lay our hands on $150, by Monday the 6th. None of us has this in ready cash. It will pay for his physical, his CDL test and fees and his background check.

So, this is the deal.
We're asking for you to help us give this kid a hand up. I've committed to getting him to classes for the three weeks and making sure he passes.

Just kick in a buck, $5. It all goes to getting him into school and then on the road.
This goes through my paypal, you know the drill: valarltd at yahoo

We're not asking you to do it for nothing:

Anything we go over $150 will get equipment for him for the road: a plug-in cooler, bedding, etc.
Posted by Angelia Sparrow at 1:52 PM No comments:

The reviewer had a lot of nice things to say about Inkstained Succubus' first anthology.

And a fair number for my story, "Riding the Edge." When Naomi and I are on, we're on!
Posted by Angelia Sparrow at 10:17 PM No comments:

My Sexy Saturday: Our Sexy Romance

And along the way, they have the sexiest romance ever. They love each other to distraction and with every word we know and come to understand that love.

The first couple I thought of for this was Sean and Gabe. 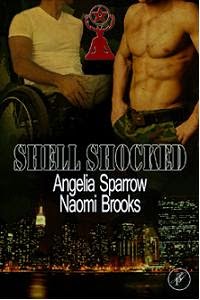 Blurb:
Sean Dempsey came home from Iraq with artificial knees, scorched retinas and a lot of baggage. He supplements his disability checks with money made writing romance novels under a female pseudonym, ironic as he has grown very nervous around women since a certain suicide bomber. When he meets Gabriel Herne, legless phone psychic, the sparks startle him. It’s everything he’s written about and never believed.

Swept into a whirlwind romance, Sean has to learn about his newfound bisexuality and his lover’s pagan faith at the same time. And when he has a religious experience of his own, he discovers everything changes in its time, just like the Wheel of the Year.

Sean let Gabe kiss him for a couple minutes and then startled with a scream when a car backfired. Gabe's hands on his arms stopped his automatic reach for his rifle. Gabe's magic voice stroked over him, soothing him.

"Shh. It'll be all right. It's just a car. Just a car, Sean. Did you have to take a pill to get to the clinic today?"

Sean nodded, breathing fast and sweating. "Yeah. The dreams were really bad last night, Gabe. I was almost too shaky to go, but it was my last pill. Really bad dreams. The drugs aren't cutting the cycle anymore. I have a VA appointment the first."

Gabe grew serious. "Sean, the drugs are going to kill you if a sudden dive to the pavement doesn't." He kissed the scraped skin of Sean's palms. "That stuff is so bad for you and it sounds like you're needing more."

Sean's face went tight and he shook his head. "It's all I got, Gabe, all that works and even this isn't working." The fear he had never voiced until now turned his words panicky.

"Shh." Gabe held him tightly. "I have a couple of ideas. Sex, of course, being the sovereign remedy for sleeplessness and bad dreams."

Sean just nodded and clung. He still had Gabe. Beautiful Gabe and his magic voice that made all the bad things back off a little.


The Other Lovely Folks on the Hop:

2) Pack books! We have Spellbound Desire and Nikolai Revenant in print!  Books are packed.

6) make oodles of chocolate cupcakes. In a toaster oven.

9) Buy ingredients for Scarecrow Crunch and possible other party mix.

13) Update Iphone with music and sexy e-books.
13a) swear at Apple and go with radio

14) collapse and catch 3 hours of sleep before the 384 mile drive.
Posted by Angelia Sparrow at 9:36 PM No comments:

It's been a fairly busy day.

I guestblogged at the Science Fiction Romance Brigade about love, sex and dystopias.

I helped with intake on Candle in the Dark, the Inkstained Succubus winter holiday anthology. That's not political correctness. We have a New Year's Story, a couple Yule stories, a Christmas story, and a couple others.

And, I got a surprise in the mail. 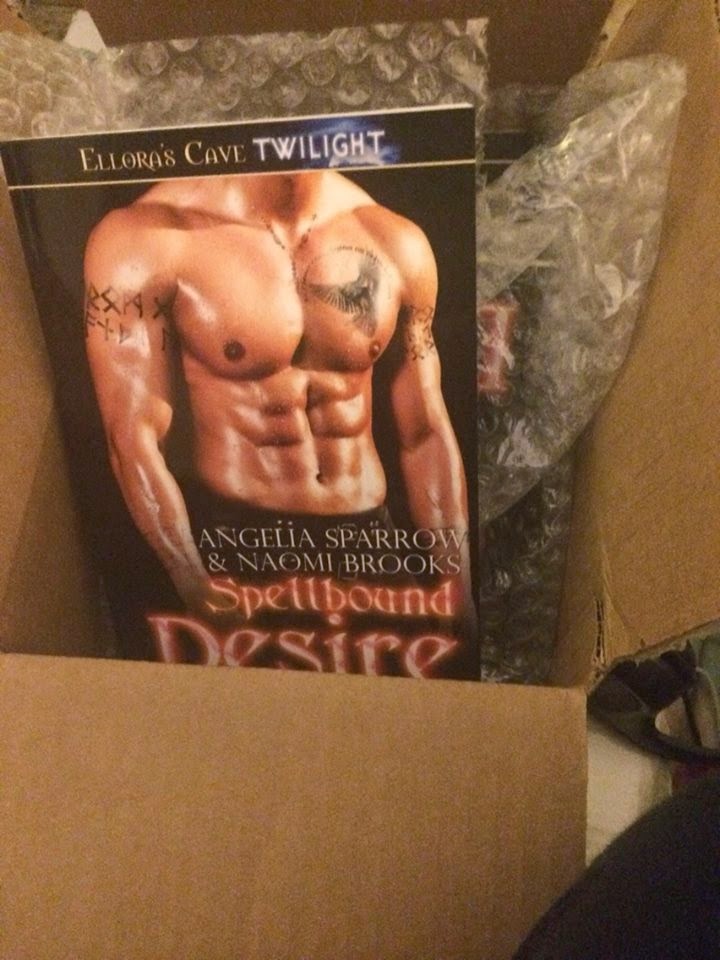 My Sexy Saturday: Sexy Into you

How about the characters that are over the top about each other, regardless of the situation? The ones who can never keep their hands off one another. The ones you know will be that little old couple you see at the park, still holding hands after 50 years. It’s those couples we are talking about this week.

This week, it's Marcus and Samil. Who will never be the little old couple holding hands in the park, because Samil has been dead for 4000 years and Marcus has been assigned by the Council of Eternity to be his body servant and keep him grounded in the modern age. 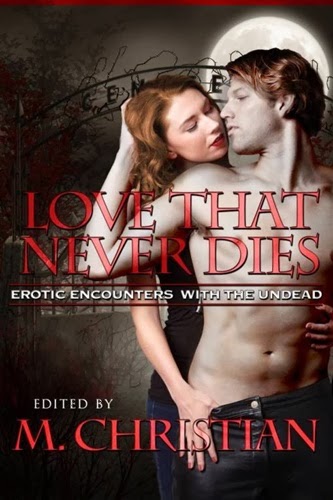 The next noontime, over shirred eggs, Samil looked at him. "Emperors aren't usually outed until they are dead," he said.

Samil rolled his eyes and slammed his coffee cup into the table. "Have you no opinions on anything, man?"

Marcus kept his face neutral. "You pay me to cook and kill and keep you comfortable. You do not pay me to have opinions."

Samil caught his eyes with the dark ones that seemed to be the very definition of infinity, cold, black and endless. "Then at least tell me this. What, exactly do you think of me?"

Marcus saw Samil wanted the truth. He swallowed hard against all his training and spoke his personal opinions. "You are a handsome and complicated man. Dangerous, certainly, and a perfectionist as well. Keeping you pleased is a challenge even for me. You are ruthless when it suits you and surprisingly generous. I find you quite attractive, but since you are not interested, I will not pester."

Samil ran one slow finger down Marcus' face, leaving a trail of fire behind it. "Don't mistake caution for lack of interest."

Posted by Angelia Sparrow at 2:30 AM 2 comments:

Some years back, I wrote a book called Nikolai.  Things have changed, and Nikolai was looking a little dated. So with the aid of Gabriel Belthir, I rewrote Nikolai, changing things I had never been happy with and setting up for the forthcoming books.
This is for you loyal readers who have copies, and for new readers interested in our work. If you've played in the Eight Thrones universe, or listened to me ramble, or whatever.
Nikolai Revenant, the rewritten Nikolai, is currently free for the month of September.Anthony, the prequel, will be out soon. 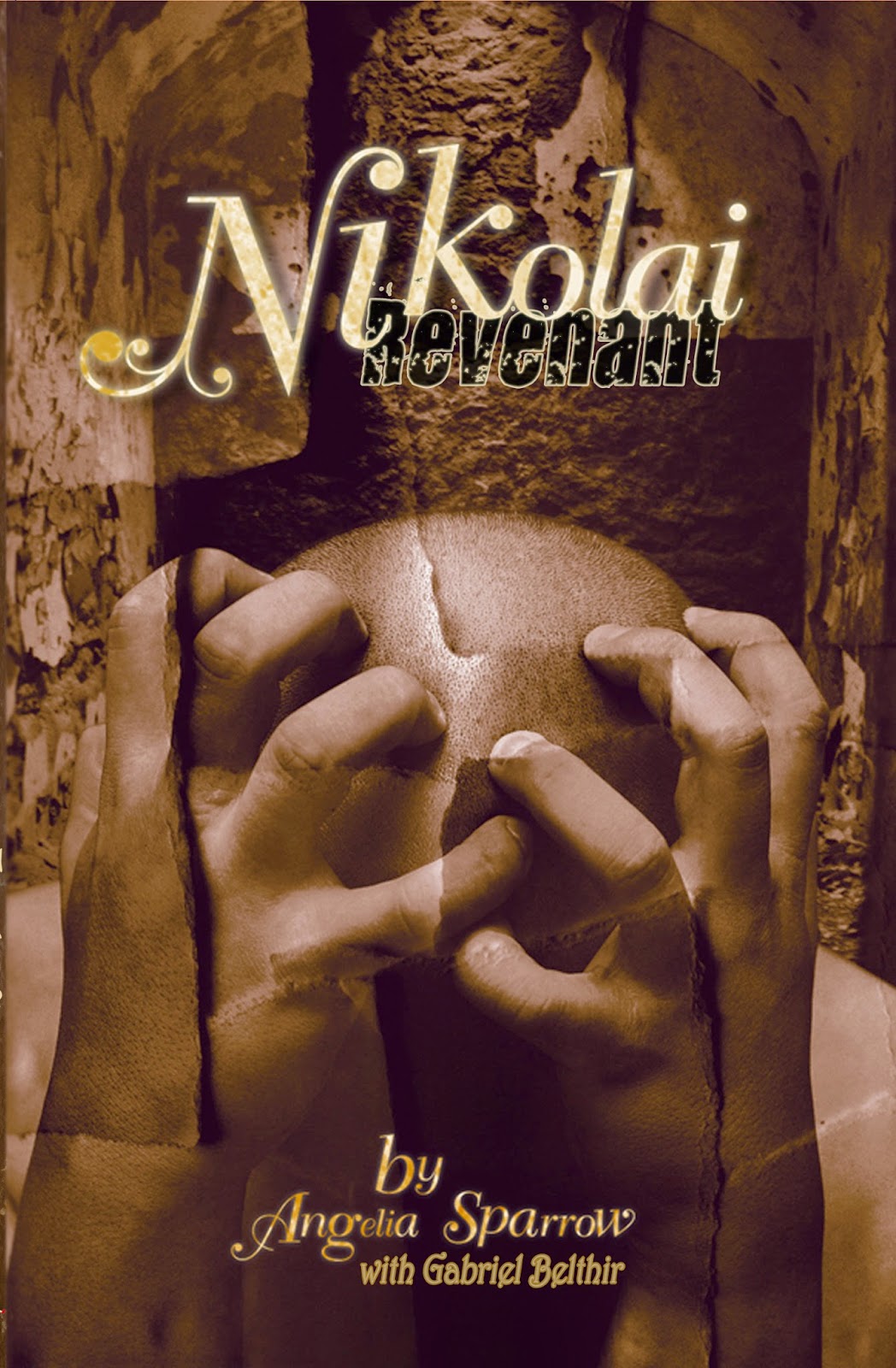 To get your .pdf copy, right click here  Nikolai Revenant
To get a .mobi or .epub copy, drop an email to inkstainedsuccubus at gmail.
We love you, our faithful fanbase, and hope you will join us on the journey to finish the series.
Posted by Angelia Sparrow at 10:27 PM No comments: