The Cleverness of Me

I have a bad habit of rereading my own work.
Here is this morning's piece, from Power in the Blood.
http://www.stormmoonpress.com/books/Power-In-the-Blood.aspx

(The Kid, Ambrose Doolittle, is the one in the red neckerchief on the cover. Jacob shot him in about 1890 in a card game, making him Undying.) 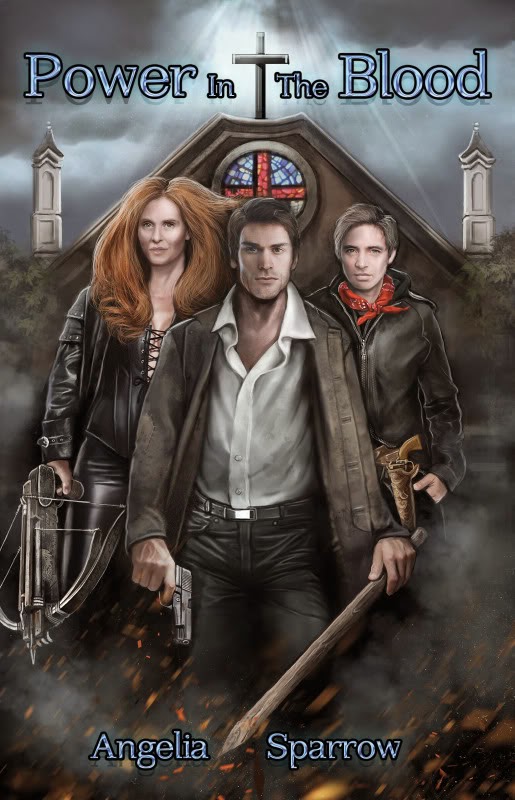 He rose and followed Jacob to the bathroom, only to flinch at the sight of two iron spikes and a heavy mallet. It would be hard penance, but he would endure it. Jacob only did it from love of him. He needed to be perfect to carry out the Hunt, and Jacob would make him perfect once more.

"Stand within the shower stall, son," Jacob said. "Strip to your small clothes."

The Kid stepped out of his gun belts first. Then he shed his boots, socks, and jeans. He took off his shirt and folded it neatly. He stood in the little shower cubicle, wearing only his briefs, and waited.

The Kid obeyed, taking a deep breath to brace himself. He shut his eyes, not needing to see this coming. He held his breath until he felt the touch of the iron spike on the thin skin of his wrists. Then he let it out with a whispered "yes." He always said yes to
punishments.

Long ago, they had walked on the beach in Mexico, enjoying the blue waters of the Gulf. Jacob had picked up a nautilus shell, a dirty drab thing. "We are like this shell," he had said. "We are filthy. But pain, holy pain is like the tide." He swished the shell through the water, washing it clean. "When we let it flow through us and fill us, it will wash back out, taking our filth and debris with it." Jacob  turned the shell over to show him the lustrous mother-of-pearl interior, clean and gleaming. "When we say no to the pain, to God's chastisement, we trap our own sin within ourselves." He folded the shell into the Kid's hands. "Remember the shell when the tide of pain washes through you."

Jacob struck hard, driving the spike through skin and tendon, between the bones and into the wall behind him. The Kid bit down on his screams, holding them as long as he could and thinking of the nautilus shell that still rode in his saddlebag. The tension made the second blow, which fixed him more firmly to the wall, twice as painful as the first.

"Beloved Ambrose," Jacob said, bending in for a kiss, his long frame over a head taller than the Kid's. With his maker's tongue in his mouth, the Kid let go of the screams, giving them all to Jacob, letting him taste and swallow them.

After several long minutes, Jacob broke the kiss, the Kid found the pain had subsided to a bearable level, and he no longer needed to scream. He stood, sobbing with pain, feeling the blood run down the skin of his inner arms. He flexed his hands involuntarily and gasped at the agony.

He dropped to one knee, and Ambrose retained enough presence of mind to cross his ankles for the second spike. That one scraped tibia and fibula as it slid through the space between them just above the ankles. Jacob had told him that spiking the actual feet made for longer recovery, since it broke so many bones. They'd all had it through the feet once, when Jacob and Ambrose and all his brothers had undergone a purifying crucifixion ritual in the Philippines back in 1965. It had taken him a week to regenerate enough to walk.

Again, he held his screams until Jacob kissed him. This time, his teacher feasted on the screams, glutting himself like a vampire would on blood.

"Blossom, my little butterfly," Jacob said, closing the shower stall and turning out all the lights before shutting the bathroom door.

The Kid hung in darkness, bleeding and in pain. The ache of the spikes grew to a raging, bitter pain that combined with the muscle aches until he was sobbing again. "Yes," he whispered through the sobs, and the pain lessened a little. He breathed slowly, letting the tide of pain roll through him. It would pass through him and over him, fill him and empty him, and he would be worthy again, clean and gleaming.
Posted by Angelia Sparrow at 11:21 AM