I've seen this around and it looked like fun.
Chain-Male is my most recent release, from Amber Allure. 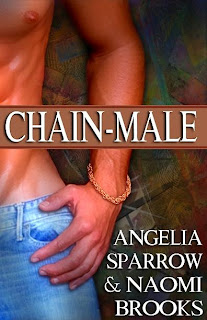 I worked for Christian Brothers for five years. Hence the choice of Interlibrary Loan Librarian for Chad. I actually did have to send a book to Truth or Consequences New Mexico, work late nights in the library, monitor computer use and work-study students. In my head, Chad works at CBU.

War of the Lilies is an annual event held in the center of the Kingdom of Calontir in June. (this means Kansas City MO) Each year features a different scenario, from Shires (small groups) vs. Baronies (larger ones) or Grand Tournament of Artisans to a Week of Henries or Laurels (those recognized for great crafting skill) vs. Pelicans (those recognized for great service).

Much of what Chad sees is akin to what one would see at Lilies: the merchant's row (most smaller events have ten merchants tops), the bardic, the fighting, including the castle battle. The Resurrection Castle Battle depicted in the story is strongly based on one I saw at my first Lilies War, back in 1990.

Most of Jace's gear is based on my own. I built the viking tent and the rope bed, helped build tables like his and owned one of those chairs.

VividCon introduced me to the Xena episode "Lyre, lyre, hearts on fire" and the Joxer Dance. They start the Friday Night Dance party with it.

Kind of together, actually. These ladies had a big influence on the scene where the guys go for breakfast. My sister Jen introduced me to a restaurant in KC called "First Watch" which is only open for breakfast and became the inspiration for "Early Shift." Waldo and I had lunch at a mediocre diner in Chicago and her potato pancakes made it in as Jace's order.

Gary taught me to make chainmail.
All I've done is a bracelet and a dancing belt in simple four-in-one, but this gave me the starter background for Jace's hobby.
Posted by Angelia Sparrow at 4:17 PM