We'll be drawing for an e-book copy of Riding the Nightmare on Monday. Leave a comment with your email to enter. 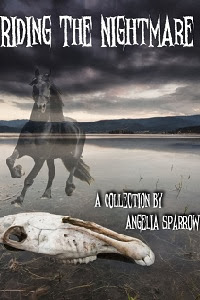 Eighteen gay dreams and nightmares to leave the reader wanting. Paul and Dan, architect and English professor, and werewolves, as they get together with internet friends, explore Memphis, save the world and fall in love. Chris and Dave love dressing up for conventions, usually with sexy results. Apollo and Zepheryos, a sadistic incubus, a variety of truck drivers, academics, thieves and morticians await between the covers.

There it lurked, hulking atop a low rise, half hidden by overgrown tress and out-of-control weeds. Old Baptist Hospital with its wide lawns, iron fence and empty windows, loomed at the intersection where Pauline ran into Crump, a photographer's dream of light and shadow.

I drove by it a lot, my eyes always shifting to it of their own accord, but on this late autumn afternoon, I finally stopped to shoot. No one stopped me as I drove up the old drive, running over the weeds that came up over my bumper.

I parked out by a building with a huge smokestack labeled "Hope Clinic." My cynical side made me wonder just what sort of "hope" the clinic peddled. I wandered the grounds, shooting the broken-out windows, the long shadows, the overgrowth and desolation.

I got a pretty decent shot of my shadow next to the entrance sign, heading for the missing door. After two rolls, I got up my nerve to venture inside.

"This is stupid, Michael. Don't do it," I whispered to myself.

Ignoring my own good advice, I walked the sickly green halls, taking pictures of the empty rooms, shooting them so they'd look like antechambers of Hell. Trees were framed at just the wrong angle in the windows. The light was getting chancier and I took advantage of the shadows and unexpected illuminations.

The building had been used as shelter by transients. Bits of fires, graffiti, the occasional den in a sheltered corner where the remaining doors could be closed for protection from the wind and ice. I caught a few of these. The Flyer always ran a heart-tugging story on homelessness when the weather started getting cold.

I shot some of the graffiti. Most of it was basic crude intaglios: initials, drawings, dates. There were some more skilled artworks.

One in particular made my skin crawl. I didn't recognize it, but I shot it anyway. It looked sort of like a summoning seal, but I'd never seen one with eight points. The language around the edges looked like Latin and I figured I could translate once I got it developed. The seal had me curious, but it made me nervous at the same time.

A low-grade stomach churn and the skin crawling on my neck like It was watching me -- whatever It was. I'd see what I could find in the occult section at work.

I finished the roll and got back in my Beetle. I drove out of the gate as darkness fell and straight to the nearest bar. After two drinks, my hands stopped shaking and I poured myself back into the bug and drove home.

I'd develop the pics after work. I didn't feel like fooling with it right now.

I didn't feel like eating either, so I just went to bed.

Ah! A picture. Now that I can work through. Yes, and he's a developer sort. When he develops that one he's mine.

Mother Lilith, why do you put such mortals so near yet so far, like the temptations of Heaven? Is it to remind us Winged Ones that we can have neither?

Hm! Bisexual. He dreams of pretty red-haired girls and pretty blond boys at the same time. I wonder which way he'd like me better? The succubus shape never feels as right as my incubus form. Most demons are neuter and we Winged Ones switch as the mood takes us. But a few, like me, have a distinct preference. I am male.


Sounds of the Season

Pics of the Day, an even dozen:

Posted by Angelia Sparrow at 12:15 PM