Today's excerpt is from "Paying Forfeits," in which a pair of board gamers decide to start playing for sexy prizes.  It was originally published by Torquere Press in their "Games People Play" line.

This is currently available from Inkstained Succubus, in their Into Dark Waters collection. 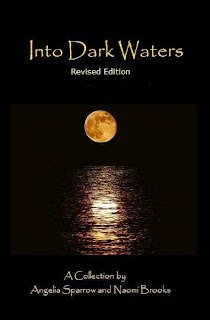 Sam and William enjoy their weekly board game. They enjoy it more when they begin playing for forfeits, a piercing here, a sexual play scene there. But when William's godson, Billy, is sent to them by his father, things change. Billy is indiscreetly gay and it is up to Sam and William to teach him proper behavior, and good sportsmanship.

BIlly has just arrived, met Sam who is being William's puppy all week, and been invited to play.

In the shadows of the rose arbor, William bent close and kissed Billy in such a way calculated to make Billy decide that what his godfather didn’t know about kissing hadn’t been invented. William enjoyed kissing to no end and was very good at it. He’d never understood men who didn’t like it.

“Yeah, I’ll play. I think it’ll be fun." Billy swallowed hard, realizing he’d just admitted he liked men, a terrible stain in his family’s eyes. To cover his confusion, he looked over the eight horses in the stable, then looked back at William, delighted as a child. “Can I ride?”

William gave him a wicked smile. “Only if you do so naked and allow me to watch. Would you like to take care of the horses?”

“Lovely. I’ll introduce you to the stablemaster in the morning. For now, we need to get back to the house. This week, Sam is being my puppy and it’s almost time to walk him. Come meet him.”

“No, dear. It’s very kinky. And we’re having great fun." William pushed open the door and Sam crawled to him, collared and naked, with a leash in his mouth. William squatted down and petted him, tousling his hair and speaking in the voice people used with dogs. “You’re a good boy, aren’t you? Such a good puppy. Are you ready for walkies?" He clipped the leash onto Sam’s collar then turned to Billy. “Billy, dear one, would you like to walk the puppy?”

Posted by Angelia Sparrow at 2:00 AM

Wow! What an interesting snippet. Thanks for sharing!