My Sexy Saturday: Sexy Me Once

We all know that love happens and we want to know all about those special moments where those entities realize there is an emotional bond between one another. It can happen on an average day, during the night, in the middle of a zombie invasion or maybe a place where it’s hard to tell the day from the night like in a submarine or deep in space. The one thing we do know it’s going to be hot…hot…HOT!

I'm currently hard at work on the sequel to this, so have some Edward and Charlie from Curse of the Pharoah's Manicurists 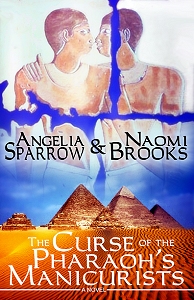 Seven Sexy Paragraphs:
Charlie rubbed his cheek against Edward’s wrist. “I’m not sure. I feel terribly silly, as if the world’s not quite real. Or as if I’m not quite real.”

Edward never stopped touching him. “Well, you won’t feel so silly tomorrow. I’ll make sure the ladies don’t go knocking on your door too early.”

Charlie sighed softly. “Thank you.” He settled in, making himself more comfortable on Edward’s shoulder. They rode the rest of the short distance to the town house and Edward parked the car.

Neither man moved for a few moments and then Edward tipped Charlie’s face up to him. “Is this real?” he asked. He kissed Charlie, his lips soft and warm, moving very gently.

Charlie nodded as Edward let him up. “Very real.” He stretched up, trying to get closer to Edward’s lips. “The only real thing in the world.”

He finally reached Edward’s mouth and tasted it. More soothing than the tea, more warming than the brandy, Edward tasted of both and of the tobacco and of himself. Charlie flicked his tongue over Edward’s lips, trying for more of his taste and Edward opened to him. The warm wetness of his mouth encouraged Charlie and he plunged deep, taking what he’d wanted since the first day he’d seen Edward. Charlie was dimly aware of big hands on the side of his face, holding him close. He became more aware as they eased him away, breaking the kiss.

“It’s late, Charles. And you are going to have a sore head tomorrow.” He kissed Charlie’s forehead. “Up to bed with you. I’ve already taken shameless advantage of your first intoxication.”