Old King Plague is dead.
The Smallpox plague is dead.
No more children dying hard
No more cripples living scarred
With the marks of the Devil's Kiss
We still may die of other things
But we will not die of this!
--Ballad of Smallpox Gone, by Leslie Fish. 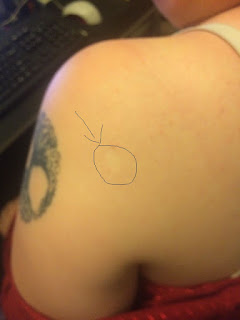 The other day, a friend asked what that scar on my back was. I've circled it in the picture above.  "That's my smallpox vaccination scar." I ended up showing it around the room of thirty-somethings, as if it was a relic of a bygone era.

Then I realized it was. The oldest in that room will be 37 next month. She has no smallpox scar. My children never were vaccinated for smallpox. The last case was in 1977. In fact, by 1914, most industrialized countries had it mostly wiped out through vigorous vaccination programs that started in 1800. there are only two places smallpox virii are stored, and WHO recommends destroying them.

The disease that killed Ramses V, Edward VI (Henry VIII's only son) Tad Lincoln (Abraham Lincoln caught it and had to be quarantined shortly after the Gettysburg Address), Jonathan Edwards,  and Pocahontas has not been an actual threat since I was in single digits.

When I was a kid, there was no question about vaccines. They used to line us up in the school gym, Army style, and use a needle gun. We all got them or we didn't go to school. If we missed them, the school nurse would have a shot clinic early in the school year. I was jealous of the kids who needed a polio vaccine, because it came on a sugar cube.

Let me repeat that.
Presidential candidates are coming out against mandatory vaccination.

This one phrases it as parental choice on "more esoteric vaccines" (in short, Gardasil) and that schools shouldn't mandate it. Others witter on about personal choice and freedom. People claim there is mercury in them or they cause autism. Both of these have been debunked so many times it's verging on ridiculous that people still believe it.

I'm waiting to see which of the other politicos comes out in favor of epidemics and death,

All right, let me lay this out.

Smallpox is eradicated. The scourge that haunted humanity for 10,000 years has been wiped out by vaccination, within my lifetime.

My mother remembered the fear that summer time brought, and Polio. Of the avoiding public places and pools, and iron lungs. My grandparents remembered FDR in his wheelchair.
Donald Sutherland, Arthur C Clarke, Alan Alda, Mia Farrow(8 months in an iron lung), Dr. Oppenheimer all had polio. Dinah Shore still has a limp from it. Clarke died of complications from post-polio syndrome. Margaret Steiff, whose toy company makes famous teddy bears, was wheelchair bound from it.

My children know none of this. Only one of them ever got chicken pox. The rest got the vaccine.

My generation doesn't remember iron lungs. I think I knew one or two kids who got measles. My generation didn't have quarantine cards in the windows or classmates dying of it. And this is why the anti-vax crowd runs 50 and under.
~~~

I could keep going.
But those who believe won't hear facts. Facts only make them angry and they talk about falsification and conspiracies.

But let's talk a moment about Gardasil.
This protects against HPV of the kind that causes cervical cancer.
many people are against it for moral reasons. Although what morality there is in raising your daughter's chances of cancer eludes me.

I have sat on the table and heard the words "squamous cells." I planned and plotted and sorted in my mind for weeks. I know what it smells like when the doctor burns the top layer of cervical cells off with a hot electrode.

If I can spare my kid that, absolutely.
My daughters are going to have sex. Probably not with one person for the rest of their lives. I know this. I accept this. The people who are against Gardasil almost uniformly do not accept that fact. (even though they themselves are in the "more than one partner" corner)
If this was about lung cancer, there would be no controversy.
But Sea and Stars forfend that some woman should have sex and not die!

~~~
Get the vaccines.
Protect your kids.
Protect those who can't get the vaccines or whom the opportunistic infections would kill.
Think beyond "my kid is getting poked with a needle. NO!"


Posted by Angelia Sparrow at 4:00 PM